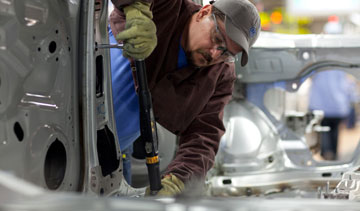 A Volkswagen official in 2015 said potential unionization at its only U.S. plant won’t impact the decision on whether to add production of another vehicle. PHOTO Volkswagen

NASHVILLE—The United Auto Workers says Volkswagen officials have reneged on a pledge to recognize the union at the German automaker’s lone U.S. plant in Tennessee.

Gary Casteel, the UAW’s secretary-treasurer, on June 21 released a 2014 document stating that Volkswagen would recognize the UAW as the representative of its members in exchange for the union dropping a challenge to the outcome of a union election at the plant in Chattanooga.

The union said the written agreement stemmed from negotiations at a meeting led by Volkswagen’s then-chief financial officer, Hans Dieter Poetsch, who has since been named chairman amid the company’s diesel emissions cheating scandal.

Volkswagen is mounting a legal challenge to a union election at the plant last year in which about 160 skilled trades workers voted to be represented the UAW.