Fearing to ask for permission to step away from the line, an Oxfam report says workers at food processing plants have resorted to wearing diapers 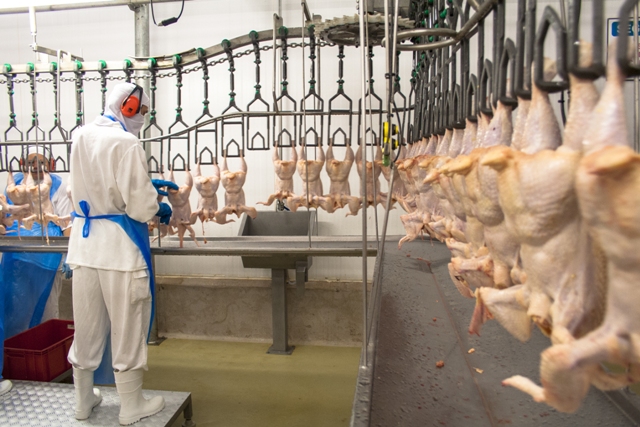 With Americans consuming an average of 89 pounds of chicken per year, the processing segment is part of the $50 billion chicken industry. Oxfam alleges that not all workers are treated fairly

BOSTON—A report from international advocacy group Oxfam says poultry workers in the United States labour in a “climate of fear,” alleging that many workers are even afraid to ask for permission to go to the bathroom.

Released earlier this week, the report says a worker at a Simmons Foods plant in Arkansas told Oxfam that she and many others have resorted to wearing diapers instead of asking for a break. Meanwhile, a Tyson Foods worker also said in the report that many workers at his North Carolina plant “have to urinate in their pants.”

In response Simmons says the allegations are “troubling” and the refusal of bathroom breaks isn’t tolerated. Tyson says it’s concerned by the claims, but currently has “no evidence they’re true.”

The National Chicken Council meanwhile, says it believes that “such instances are extremely rare.”

Chicken is the most-eaten meat in the U.S., with consumers eating an average of 89 pounds per year. The industry is valued at approximately $50 billion—but Oxfam says the profits are not trickling down to line workers, accusing the industry’s processing segment of squeezing profits out of workers who hang, cut, trim, freeze, and package chicken.

Using McDonald’s McNuggets as a example, the advocacy group says line workers are earning just two cents of each dollar spent on the fast food fare.

According to Oxfam, four companies: Tyson Foods, Pilgrim’s, Perdue, and Sanderson Farms, account for about 60 percent of the American chicken packaging market.