Town of Asbestos, Que. seeks new image after mine closure 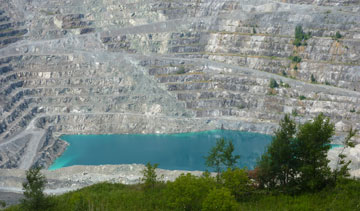 The Jeffrey open pit asbestos mine in Asbestos, Que. is known locally as “The Hole.” PHOTO Bryn Pinzgauer

ASBESTOS, Que.—To residents of Asbestos, Que., the once-mighty Jeffrey mine that gave the town its identity is known simply as “the hole.”

But almost five years after Canada’s largest asbestos mine stopped producing the controversial fibre, Asbestos is looking to move on from the industry that supported it for more than a century.

Key to the efforts is a $50-million regional diversification fund, put in place by the former Parti Quebecois government in 2012 after it cancelled a $58-million loan the Liberals had promised to help the mine renovate and reopen.

Mayor Hugues Grimard is hoping the subsidies available through the fund, paired with industrial know-how and a little hustle, will be enough to attract new businesses to the town of 7,000 residents two hours east of Montreal.

“There are several projects on the table, several important announcements that have been made, and others are coming,” he said in an interview. “The strategy is working.”

In June, Brome Lake Ducks announced a $30-million plan to create a new processing plant and hatchery in the town. That project is expected to produce 150 jobs.

Other new businesses include a pharmaceutical company, a cheese factory and a microbrewery with beer names such as “La Mineur” (“The Miner”), “L’Or Blanc” (“White Gold”) and “La 1949” (“The 1949”) after the year of the famous asbestos strike.

But it hasn’t been easy. There have also been closures, and many of the new businesses are taking over facilities vacated by others.

Grimard says the town is turning the corner.

“It won’t get done tomorrow morning but over the next few years we’ll change the economic context because the base is there,” he said.

For the sake of image, he says all the mine’s buildings that aren’t currently in use are being demolished.

It was opened after asbestos was discovered in the region in the late 1870s, and grew as demand skyrocketed for the “magic mineral” known for its fire-resistant properties.

Pierrette Martineau-Theroux, a lifelong resident, remembers a time in the 1960s when more than 2,000 people were employed at the mine _ before scientists began raising the alarm over health issues.

But by the 1980s, worldwide demand for the fibre was in a freefall due to a spike in the number of cases of asbestosis, an inflammatory lung disease linked to different cancers.

The mine’s workforce was slashed and production halted, returning intermittently until the PQ’s announcement quashed the final hope for a revival.

Despite health organizations saying the material kills more than 100,000 people annually, many Asbestos residents insist it can be safe if handled properly.

Francesco Spertini, a retired geologist who spent 32 years working in the mine, says all mining operations can be dangerous.

“All mining activity creates dust, which, once you inhale it, causes emphysema at a minimum,” he said.

He says in the past, workers disregarded the safety regulations surrounding safety and the wearing of masks.

“If you don’t saw into it, if you take the necessary precautions to control the dust, you can control the risks,” he said.

On a drive into the pit of the now-defunct mine, Spertini stops to pick up a rock with a white, fibrous streak of asbestos running through it.

“It’s sad, the end of the mine,” he said. “Usually, the mine ends when the material is exhausted, but that’s not the case here.”

Today, the upper levels of the mine are turning green with trees and shrubbery.

The underground mining facilities are now under water, and the mine’s main occupants are turkey vultures who circle endlessly overhead.

But although nature is slowly taking over, the locals say the mine isn’t just part of their past.

Spertini says the site contains other minerals including magnesium, which is present in the same rock that produces asbestos.

Although one magnesium-extraction operation went bankrupt a few years ago, an improving market could make it viable again.

One company, Alliance Magnesium, is in the process of creating a pilot plant that could begin extracting magnesium from the mine’s tailings in 2017.

In addition to mining, Grimard says the site has other potential uses including water, tourism and education.

In the interest of moving forward, Grimard said he’s even willing to consider changing the town’s famous name.

“Personally, I think it’s our past and I’m proud of it,” he said. “But I’m not closed to any municipal initiative, and if one day we need to take another look at our way of doing things and our identity, we will.”

The town rejected the name-change idea a decade ago, but Martineau-Theroux thinks it’s something that will need to be revisited.

Although she has no problem handling a chunk of asbestos with bare hands, she believes the name itself could be fatal to the town’s hopes of drawing new businesses.

“Outside the town, it’s still deadly,” she said.