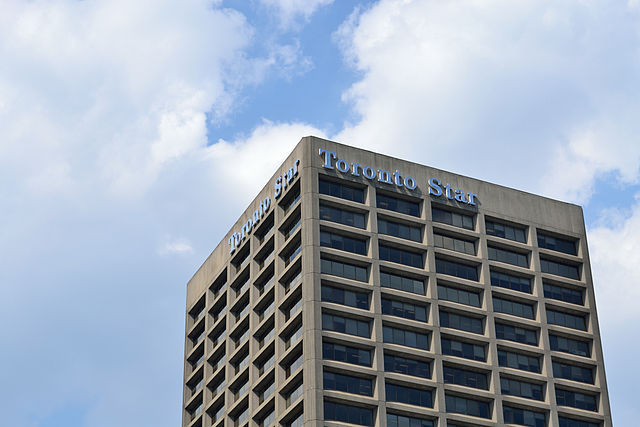 The Toronto Star will stop the presses later this year. PHOTO: Raysonho, via Wikimedia Commons

TORONTO—Broadsheets will run through the presses at the Toronto Star’s printing plant in Vaughan, Ont. for the last time later this year.

The company’s parent, Torstar Corp., has announced the daily paper will close the plant by July leading to the loss of 220 full-time jobs as well as 65 part-time jobs.

“This decision represents another important step forward in the evolution of the Toronto Star,” David Holland, president and CEO of Torstar, said. “After consideration of many factors, we feel we are making this move at the right time with terms that are attractive.”

The company said it has begun discussions with the unions representing the plant’s workers and will develop a transition plan.

“This is an important step for the Toronto Star, but unfortunately it also means we will be saying goodbye to our long-time Vaughan printing plant employees,” publisher of the Toronto Star and president of Star Media Group, John Cruickshank, said.

The Star will turn to Transcontinental Printing, the country’s largest printer, which prints papers for circulation across the country, including the Globe and Mail, the Montreal Gazette and the Vancouver Sun. Torstar has signed a five-year agreement with the printer that is expected to commence in July of this year. Canada’s largest daily will now be printed at Transcontinental’s facility, which is also in Vaughan.

“This move will allow us to focus our efforts increasingly on creating great content and engaging audiences across many platforms while at the same time reducing costs and improving the production quality of the newspaper,” Cruickshank said. “Transcontinental Printing has newer, more modern presses and this decision will result in our very loyal print readers and subscribers receiving a high-quality print product with enhanced reproduction.”

The decision will cost the company approximately $22 million in 2016 as a result of restructuring charges, but is expected to save the paper about $10 million annually by the time the transition is complete.

The $400 million plant opened in 1992 close to Hwy. 400 and Hwy. 7 north of Toronto. Commenting on the plant’s 20-year anniversary in 2012, Torstar’s board chair, John Honderich, said the plant is still one of the premier publishing facilities in North America, according to the Star.

Torstar plans to put the 675,000-square-foot facility up for sale.