by Canadian Manufacturing.com Staff, with files from The Canadian Press  August 11, 2017

Unifor occupied the plant and halted production Thursday demanding the company fund a pension shortfall; Northstar, calls the action illegal and blamed the union for mismanaging the pension 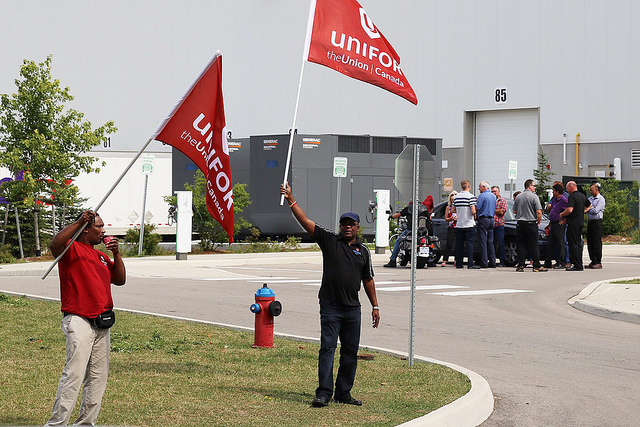 A number of Unifor locals, including Local 2002 demonstrated in solidarity with workers at the Milton plant. PHOTO: P. Buckland/Unifor 2002

MILTON, Ont.—A Unifor occupation of Northstar Aerospace’s manufacturing plant west of Toronto has entered its second day as the union demands the company fund a 24 per cent pension shortfall.

The takeover began at about 4 a.m. Aug. 10 and continued overnight at the facility just off Highway 401 in Milton, Ont.

The site, which makes helicopter gears and other aerospace components, is scheduled to close this September, resulting in about 200 jobs lost. Unifor says it has been negotiating with the company to secure cash to fund the pension deficit since January, but Northstar has refused.

The company, meanwhile, blamed the pension shortfall on union mismanagement.

Northstar, officially known as Heligear Canada Acquisition Co. after going through a 2012 acquisition, said the pension was underfunded since before the company’s current owners took over.

“Heligear has made every payment required in its negotiated collective agreement with the union which also requires the company to make a final lump sum payment,” said Greg Harper, vice-president of human resources. “Heligear has not proposed any reduction of pension benefits. Any reduction or shortfall is a function of the plan management and design, which are not within Heligear’s control.”

Harper also said the company is pursuing legal remedies to recover control of the facility and resume production of vital products needed by its aerospace and defence customers.

“Unifor bears responsibility for the current condition of the pension plan but refuses to acknowledge and accept that responsibility,” Harper said in a statement. “Unifor does not have a legal basis to hold Heligear responsible and its illegal action to seize control of the Milton facility is a desperate attempt to shift responsibility from Unifor to Heligear, through force, instead.”

The union’s National President, Jerry Dias, said yesterday the company has no excuse for refusing to funding pension plan.

“The only excuse is corporate greed,” he said in a statement, though the union also noted Northstar is not legislatively obligated the fund the pension.

Without additional investment, retirees will receive an average of $211 less per month than under a fully-funded plan.