by Canadian Manufacturing.com Staff, with files from The Canadian Press  May 4, 2016 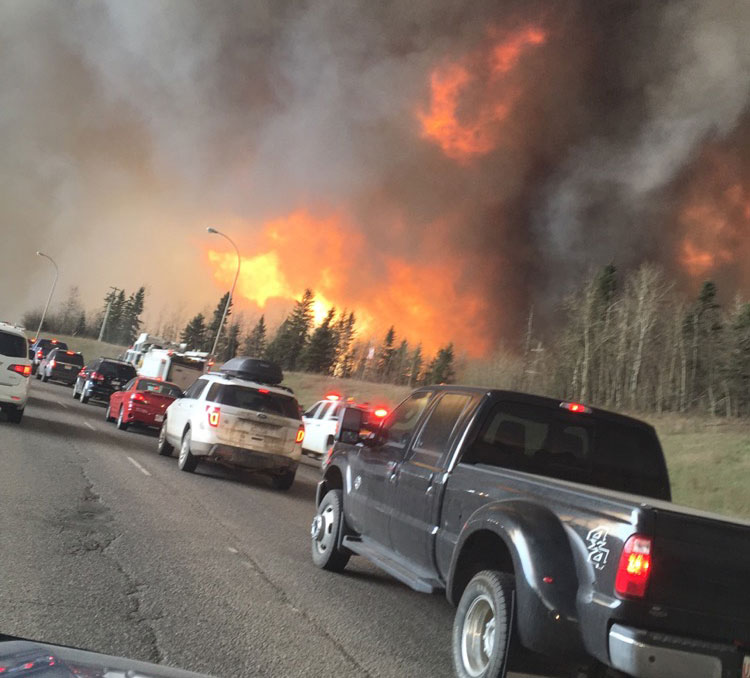 CALGARY—Whole neighbourhoods in the Northern Alberta city of Fort McMurray have been consumed as wildfires rage through a region already hard-hit by languishing oil prices.

Firefighters continue to battle the blaze, as tens of thousands flee the oilsands boomtown, seeking refuge in Edmonton, as well as in nearby oilsands work camps. Premier Rachel Notley issued a mandatory evacuation notice for the city—the largest in Alberta history—the evening of May 3, following numerous neighbourhood-specific exit orders.

The fire has already torn through homes in numerous neighbourhoods throughout the city. The Regional Municipality of Wood Buffalo says the Beacon Hill area is the hardest hit so far, with 80 per cent of homes in the area lost. With response efforts in full swing, authorities are cautioning residents to stay clear, telling evacuees already north or south of the city to stay there.

Evacuation order is still in effect for all of Fort McMurray. Residents are not able to return to their homes. #YMM #YMMFire

As residents evacuate, oil companies in the Fort McMurray area are halting or scaling back production, as well as taking in fleeing families.

“We’ve made our work camp available to staff and their families who have been evacuated and need a place to stay,” Shell Canada spokesman Cameron Yost, said Tuesday night.

The oil giant has since shut down production at its Albian Sands facility, 75 kilometres north of Fort McMurray. The company said it wants to free up space at its 2,000-person work camp for some of the 80,000 people ordered to evacuate the city. Shell is currently using its landing strip to fly employees and their families to Calgary or Edmonton to make room, and has deployed two teams of firefighters to combat the blaze.

25 kilometres north of Fort McMurray, Suncor has also slowed production at its facilities, saying it is focusing its efforts on ensuring the safety of its workers and members of the community. The company said its plant is in safe condition and the company is working with emergency response to help coordinate evacuation efforts.

Despite the massive evacuation effort, no serious injuries have been reported.

We have successfully evacuated 88,000 people with no reports of injuries or casualties so far #ymmfire

The blaze started Sunday outside Fort McMurray. Firefighters appeared have the fire under wraps the morning of May 3, and were on their way to neutralizing it when a dramatic shift in the wind sent it out of control.

Scott Long with Alberta Emergency Management said May 4 crews are doing their best but “It is a possibility that we may lose a large portion of the town.”