Beset with delays and cost overruns, the province has spent almost $4.8 billion on the project so far 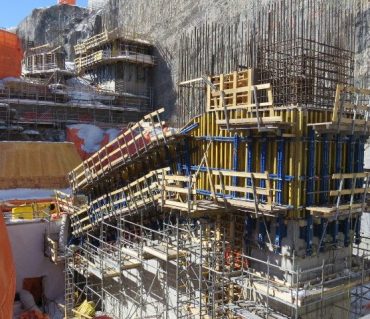 Construction of the powerhouse at the Muskrat Falls megaproject in Labrador earlier this year. PHOTO: Nalcor Energy

MUSKRAT FALLS, N.L.—Seven workers were injured in the collapse of a structure used in the pouring of concrete at a building at the Muskrat Falls hydroelectric project in Labrador, the contractor said May 30.

Matthew Pike, spokesman for Astaldi Canada, said in an email that the framework supporting concrete that was being poured collapsed at about midnight. He said the accident occurred in the draft tube No. 2 area of the powerhouse during the night shift.

“Seven employees received first aid treatment at the site, with one employee sent to the Labrador Health Centre in Happy Valley-Goose Bay for a further assessment,” he said. “None of the injuries at this time are classified as serious.”

He offered no reason for the cause of the collapse, which spilled wet concrete on the workers.

Pike said work in the draft tube area of the powerhouse has been suspended while an investigation is underway by the company, Nalcor Energy and Occupational Health and Safety officials.

Nalcor Energy spokeswoman Karen O’Neill said in an email that company officials were gathering information at the site of the hydroelectric project.

Gilbert Bennett, vice-president of the Lower Churchill Project, issued a statement saying any recommendations stemming from the probe into the accident will be followed.

“We will ensure a full safety investigation is completed and that the contractor and its workers implement all safety recommendations that might be identified following this incident,” he said.

The accident comes amid cost overruns, delays and the sudden departure of former Nalcor Energy president and CEO Ed Martin, along with questions over his departure package.

Newfoundland and Labrador Premier Dwight Ball asked the province’s auditor general on Sunday to review a $1.4-million severance payment made to Martin.

Dwight Ball said he is referring the issue of Martin’s severance package to “an independent outside agency” at the recommendation of the provincial justice department.

Martin abruptly resigned from the provincial Crown corporation behind the Muskrat Falls hydroelectric project in a cloud of controversy that has enveloped the house of assembly for more than a month.

The province has spent almost $4.8 billion building the dam and powerhouse on the Lower Churchill River, the largest publicly funded project in its history.

Stan Marshall, the new head of Nalcor, said recently there’s little chance the troubled hydro project will be cancelled despite the soaring costs and delays.

He is assessing cost and schedule overruns for a full status update he hopes to deliver in late June, and could include replacing the major construction contractor, Astaldi.