The longtime premier said the province is in need of renewal and a fresh perspective. The 51-year-old will stay on until a successor is found 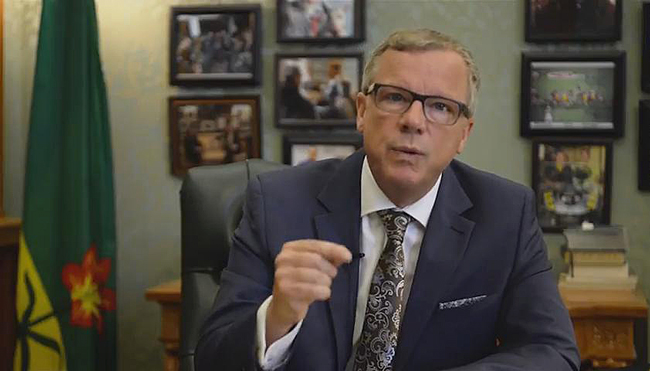 REGINA—Brad Wall says he is retiring from politics after a decade as premier of Saskatchewan.

He made the announcement in an online video posted Aug. 10 saying it’s time for renewal for his Saskatchewan Party and the province.

“This November will mark 10 years since I had the incredible honour of being elected as Premier of this wonderful province that I love. I’ve always thought that the 10-year mark—should I be so fortunate to serve that long—might be the right time to re-evaluate,” he said.

“It’s time for me to retire from politics.”

Wall says he will stay on until his successor is chosen.

“And until then, there’s still a lot of work to do,” Wall said.

“Saskatchewan needs renewal, a fresh perspective in leadership. This was such a difficult decision to make. It is hard to lay this duty down, to retire from what has been and what will always be the honour of my working life. But it is time.”

Wall and his Saskatchewan Party have won three consecutive provincial elections, the last in 2016 where they took 51 of 61 seats. The party, which formed 20 years ago out of an alliance of disaffected Tories and Liberals, took more than 50 per cent of the popular vote in each of the contests.

Wall, who is 51, routinely places high in opinion polls ranking the country’s most popular premiers and his knack for the zinger soundbite has made him a national political figure.

But he’s faced headwinds in recent months, especially after his government tabled an austerity budget this spring.

With a bottom line battered by low resource prices, the budget cut library and education funding, as well as grants to municipalities, although cash for libraries was later restored.

It raised the provincial sales tax and added it to things that were previously exempt, such as children’s clothing and restaurant meals.

The government also shut down the provincial bus company to help tackle a $1.3-billion deficit.

In May, a Mainstreet Research poll suggested Wall’s party had dropped steeply in voter support and had fallen nine points behind the leaderless Opposition New Democrats.

Observers called the poll a sign of a “a sea change” and the results breathed life into an otherwise stagnant NDP leadership race.

With trouble at home, Wall has been training his political guns afar, railing against opposition to pipeline projects that would see central Canada’s crude oil pumped to the coasts and markets overseas.

He’s also waged war with Prime Minister Justin Trudeau over the federal government’s plan to force provinces to put a price on carbon, pledging to take his fight all the way to the courts if necessary.

Wall said he is leaving the province in better shape than it was in when he first took office.

“Saskatchewan is growing and vibrant and strong,” he said. “And I will be forever grateful that I had the opportunity to play some small part in all of that.”

Wall graduated from the University of Saskatchewan with a degree in public administration and has spent much of his time since in politics.

He was a backroom guy at first. In the 1980s, he worked in Ottawa in the office of Swift Current Tory MP Geoff Wilson. He returned to Saskatchewan and worked as a ministerial assistant in Grant Devine’s Progressive Conservative government.

He was first elected in 1999 under the banner of the newly formed Saskatchewan Party and made a successful bid for the party’s top job after it lost a 2003 election many felt it should have won.

In 2007, Wall led the Saskatchewan Party to victory in the provincial election.

A tape from his time in the Tory backrooms came back to haunt him soon after he was elected. The provincial NDP unearthed a video cassette of Wall yucking it up with fellow Tory staffers, criticizing NDP leader Roy Romanow in a thick Eastern European accent. Romanow is of Ukrainian heritage.

Wall apologized and said he wasn’t trying to slight a particular group. The controversy didn’t stick.

Four years later, he cruised to his second mandate as the Saskatchewan Party took more than 60 per cent of the popular vote along with 49 of 58 seats in the legislature. The largest popular vote before that had been 57 per cent by the Liberals in 1912.

Wall and his wife, Tami, still keep their home in Swift Current. Their son Colter, who has a budding country music career, and two daughters Megan and Faith aren’t children anymore.