Ontario’s path to a balanced budget will be responsible, Ford says

Opposition politicians have accused the Tories of inflating the $14.5-billion deficit so they can justify cuts to programs and services 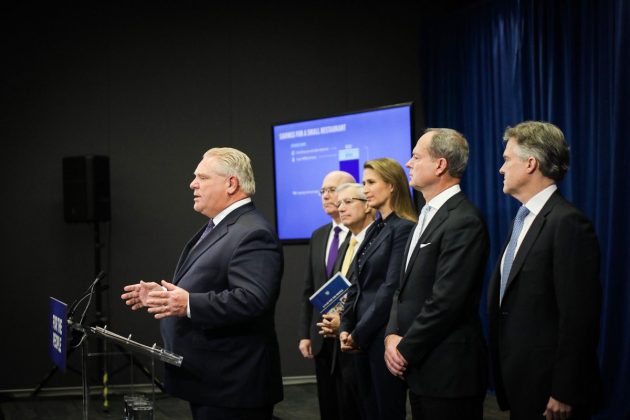 TORONTO – Ontario’s Progressive Conservative government will lay out what it calls a responsible path to balance in its first budget Thursday, but critics are warning that shiny baubles will mask deep cuts.

Premier Doug Ford has promised to eliminate a $13.5 billion deficit, but has not yet said how long that will take. When asked Wednesday about any cuts that may be planned to achieve balance, Ford did not provide details.

“I think you’ll be impressed,” he said. “We’re going to be thoughtful and we’ll balance, but again, we’re going to make sure that we’re doing it properly.”

After the Tories took office last year they pegged the deficit from the previous Liberal government at $14.5 billion, but the financial accountability officer has said it was closer to $12 billion. Opposition politicians have accused the Tories of inflating the deficit so they can justify cuts to programs and services.

The $1 billion reduction so far in the deficit is largely due to higher sales and corporate income tax revenues, according to Ontario’s third-quarter finances.

Treasury Board President Peter Bethlenfalvy said he would like to cut waste and the $12.5 billion a year the province spends on interest on its nearly $350 billion debt.

“What I can say that we are looking to cut is the level of spending (by) the previous Liberal government that we inherited, which was unsustainable,” he said.

The last Liberal budget projected a program spending increase of 3.3 per cent a year over three years.

Various budget tidbits have been announced or leaked in the past several days, including legalizing tailgate parties and redesigning licence plates – which the opposition parties say are shiny items meant to hide impending cuts.

Interim Liberal leader John Fraser said it might take some work to look beyond the distracting items to find cuts buried in the budget.

“We’ll hear about licence plates and tailgating and beer and wine in corner stores,” he said. “I’m not saying those are bad things, it’s just not the most important thing right now – things like healthcare, education, the environment.”

Sources have told The Canadian Press that Ontario will also be announcing free dental care for low-income seniors.

Education Minister Lisa Thompson has hinted that child care news will be coming in the budget.

“We certainly campaigned on ensuring that child care across Ontario is successful and affordable and flexible for families from one end of this province to another so stay tuned until Thursday,” she said this week.

During the campaign the Tories said it would work on a sliding scale, with families earning less than $34,800 qualifying for the maximum and declining to a rebate of 26 per cent of childcare costs for families with an income of $155,095 or higher. At the time the party pegged the annual cost at $389 million.