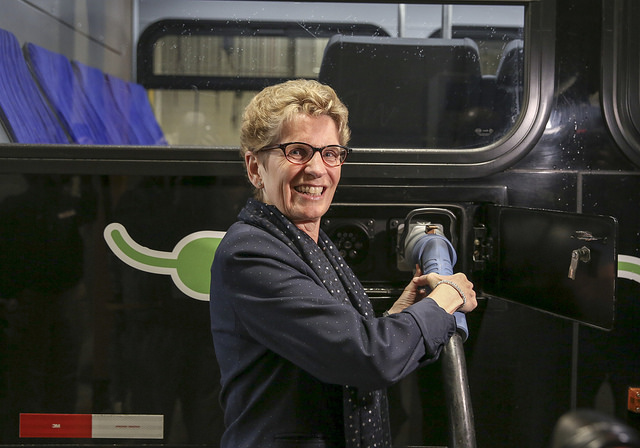 Electricity oversight has been a years-long battle for the Ontario government, which has been continually hammered by the opposition on the issue. PHOTO: Premier of Ontario Photography/Flickr

TORONTO—Critics of Ontario’s premier wondering why her dismal personal approval ratings aren’t prompting her to quit before next year’s election need look no further than government-commissioned polling.

The last nine of months of polling that have landed in Kathleen Wynne’s lap, and were obtained by The Canadian Press through a Freedom of Information request, suggest improving public opinion fortunes for a now somewhat less unpopular Liberal government.

The polling conducted by the Gandalf Group—headed by the man leading the Liberals’ 2018 re-election bid—found large support for the government’s plan for a $15 minimum wage, general support for carbon pricing, if not necessarily the specifics, and even improving assessments of the hydro file, over which the government has been consistently hammered.

McMaster University political science professor Henry Jacek said Wynne sees a path to electoral victory with popular policies, but she is still personally unpopular. An Angus Reid survey in June put Wynne’s approval rating at 15 per cent—up from 12 in March.

“I can see how she sees the path forward in terms of the policies, but I still think there are so many red flags out there,” Jacek said. “When people sour on a leader it’s very hard to bring them back. They could have the best policies in the world.”

A turning point in the polling came in March, which is when the government announced a cut to hydro bills, though in perhaps a sign of how poorly the government had been viewed up to that point, the pollsters cheered not an improvement in the numbers, but a lack of further decline.

“These are measures that have been consistently eroding over the past several months, so remaining constant is a step in the right direction.”

The worst overall month for the government came in January, with 61 per cent of respondents saying it was on the wrong track. By July, that was down to 49 per cent, versus 43 per cent saying the government was on the right track—a gap that hadn’t been that narrow since July 2016.

January’s numbers also may point to why the government in March announced a further 17 per cent cut to electricity bills. An eight-per-cent cut had already taken effect on Jan. 1, but still 46 per cent of respondents said what came to mind on electricity was increasing costs, versus just four per cent who cited the eight per cent rebate.

After March’s hydro announcement, that swung dramatically the other way, with 45 per cent of people citing “government reducing cost.”

And since then, the government’s performance rating on electricity prices increased steadily, with 44 per cent of respondents in July calling it excellent or good, up from 34 per cent in March.

When it comes to the government’s cap-and-trade system, the polling suggested Ontarians are very supportive in principle, but less so on the specifics.

In November, when the program to reduce greenhouse gas emissions hadn’t yet been implemented, 85 per cent of respondents supported limiting the amount of pollution businesses can emit, though only 52 per cent supported Ontario’s system.

And while 60 per cent agreed it was right to encourage businesses to reduce air pollution even if it led to higher costs for consumers, only 46 and 42 per cent, respectively, were OK with cap-and-trade adding four cents per litre on gasoline and $13 per month to energy fuel costs.

Given this, the pollsters suggest a line of messaging for the government.

“How the policy, cap and trade, is communicated makes a significant difference in support and in willingness to accept personal costs,” they write. “Discussing the result of cap and trade, ‘putting a cap on the amount of emissions that businesses can release into the atmosphere,’ is much more supported than using the term cap and trade.”

Support for cap and trade dropped after the plan was implemented in January, but still had the support of 50 per cent of respondents.

Wynne’s most recent major policy, a $15 minimum wage, among other labour reforms, has been very well received, the polling suggests.

In July, 71 per cent of respondents said they supported the policy.

“Increasing the minimum wage, along with protection for temporary and part-time workers, serves to increase confidence in government even more than increases to healthcare spending,” the pollsters wrote.