Though it was carried out in Seattle, the study could provide some insight as Ontario moves to implement a $15 minimum wage 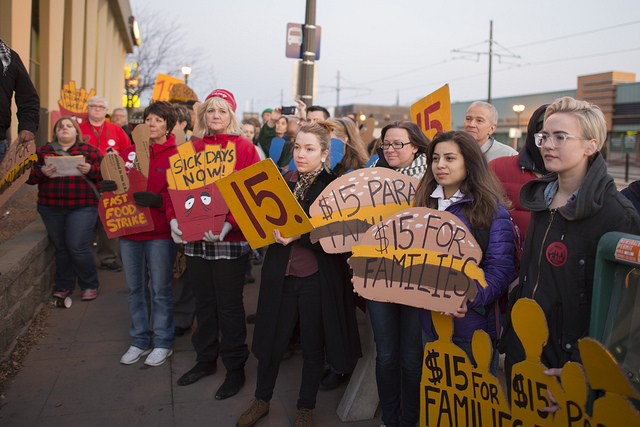 A University of Washington team studying the law’s effects found that the law has boosted pay in low-wage jobs since it took effect in 2015, but that it also caused a 9 per cent reduction in hours worked, The Seattle Times reported. For an average low-wage Seattle worker, that’s a loss of about $125 per month, the study said.

There would be about 5,000 more low-wage jobs in the city without the law, the study estimated.

Seattle was one of the first U.S. cities to adopt a $15 minimum wage law, and its experience is being closely watched as other cities have followed suit and as advocates push for a higher federal minimum wage.

In the years covered by the study, 2015 and 2016, the minimum wage was at most $13, depending on business size, worker benefits and tips. The current minimum wage in Seattle ranges from $11 to $15, and unemployment is at a historically low 2.6 per cent, thanks in part to the booming tech sector. Seattle has added about 40,000 jobs overall in the last few years.

Last week, a review by University of California at Berkeley economists found the law raised pay without hurting jobs in the restaurant industry. An author of that report, Michael Reich, criticized the University of Washington team’s methodology.

The University of Washington effort compared economic data from Seattle with economic data from other parts of Washington state—a statistical model referred to as “synthetic Seattle”—for which economic trend lines were previously similar to Seattle. By comparing the “synthetic Seattle” where no minimum wage increase took effect with Seattle itself, the researchers tried to figure out the minimum wage law’s effect on Seattle’s economy.

But Reich took issue with how University of Washington team compiled its “synthetic Seattle.” It was based on areas that “do not at all resemble Seattle,” Reich warned in a letter to the city Monday .

By contrast, the Berkeley study compared Seattle to a statistical model based on areas around the country—not just within the state—and was thus a “more representative” comparison, he said.

The University of Washington report excludes “multisite businesses,” such as large corporations, restaurants and retail stores that own their branches directly. Single-site businesses, though—which are counted in the report—could include franchise locations that are owned separately from their corporate headquarters.

Jacob Vigdor, a public policy professor and one of the authors of the new report, stood by the team’s findings. He noted that his team’s study actually corroborated Berkeley’s conclusion, finding zero impact from the minimum-wage law on restaurant employment—when taking into account jobs at all wage levels within the restaurant industry.

But for low-wage restaurant workers, the law cost them work hours, the new report said. If the minimum wage law hadn’t been in effect, those workers would have seen an 11 per cent increase in their hours, the report said.

“When we perform the exact same analysis as the Berkeley team, we match their results, which is inconsistent with the notion that our methods create bias,” he said.

Though Seattle was the first U.S. city to raise its minimum wage, the battle for higher pay is now raging across North America. Last month Ontario announced plans to increase its minimum wage to $15 an hour by 2018. The plan was criticized by labour groups for not going far enough to support workers and by business groups for putting added strain on Ontario companies.