Thomas Carrique, currently the deputy chief for York Regional Police, has been announced as the new commissioner of the OPP 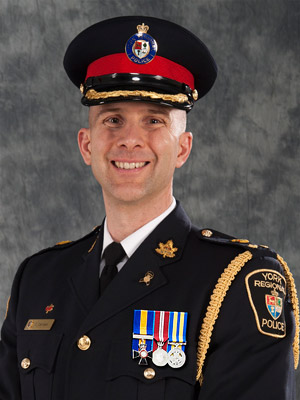 TORONTO – Ontario has a new provincial police commissioner, just five days after a friend of the premier’s withdrew from the job.

Thomas Carrique, currently the deputy chief for York Regional Police, was announced Monday as the next commissioner of the Ontario Provincial Police.

Carrique has spent his entire 29-year career with the York police and has worked in uniform patrol, criminal investigations, investigative services, traffic, marine, public order and the administration and operations branches.

“Deputy Chief Carrique’s extensive experience is important as the OPP works to tackle challenging files, such as human trafficking and the ongoing fight against guns and gangs,” Community Safety and Correctional Services Minister Sylvia Jones said in a statement.

Carrique has been appointed to a three-year term starting April 8.

Taverner, 72, is a family friend of Ford and initially did not meet the criteria listed for the commissioner position. The government has admitted it lowered the requirements to attract a wider range of candidates.

Though Taverner has returned to his Toronto police job – having rescinded his initial resignation – and a new OPP commissioner has been named, it’s unlikely the controversy will quickly fade away.

The integrity commissioner’s report is still due, a court case is pending over whether the ombudsman should be forced to investigate, the NDP has called for a public inquiry, and a former deputy OPP commissioner alleges he was fired as reprisal for speaking out against Taverner’s appointment.

Ford has previously described the job of OPP commissioner as a ‘political appointment,” but maintains his office was not involved in Taverner’s selection beyond taking part in the initial recruitment planning process. He also signed off on the official government document appointing Taverner after a hiring committee made the selection.

One of the people on that hiring committee was Mario Di Tommaso, deputy minister of community safety, who ended up personally firing deputy OPP commissioner Brad Blair, who has waged a legal battle over Taverner’s appointment.

Blair alleges that was a conflict of interest for Di Tommaso, since he is a subject of the legal battle. Di Tommaso is also Taverner’s former boss.