Prime minister Trudeau was in B.C. for a tour of the Microsoft Canada Excellence Centre at its official opening on June 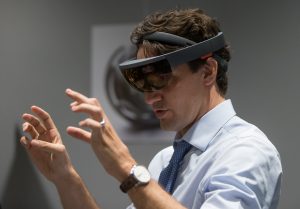 VANCOUVER—Prime Minister Justin Trudeau says a new Microsoft development centre in downtown Vancouver is big news for the city, the province and the country.

The prime minister took a tour of the Microsoft Canada Excellence Centre at its official opening on Friday morning.

Trudeau says for a “geek” like him, it was an absolute thrill to see in action the technology Microsoft has developed, including tools to make the world more accessible for visually impaired people.

Clark touted her province’s plan to teach kids coding in schools, saying it will help turn technology into a gender-equal industry.

Microsoft president and chief legal officer Brad Smith says the centre will double Microsoft’s workforce in Vancouver, from 350 to 700.