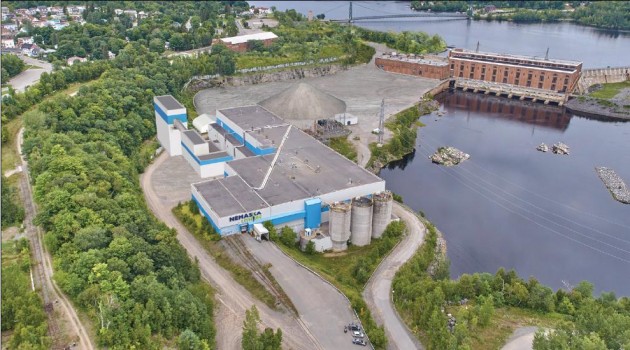 Nemaska’s Shawinigan site. The company said it will have the right to occupy the building Oct. 1. PHOTO: Nemaska

QUEBEC CITY—Nemaska Lithium Inc. has announced the company’s plan to build a hydrometallurgy plant in Shawinigan, Que. are moving forward after the Sept 4. regulatory approval of its Whabouchi Mine project, which will be located 300 kilometers north of Chibougamau, Que.

The lithium miner has signed an agreement with the City of Shawinigan for the acquisition of part of the land and part of existing manufacturing facilities of a former Laurentide plant. Nemaska will officially take possession of the property at the beginning of next year, but will be permitted to occupy the site Oct. 1.

“The decision to locate our Hydromet plant facilities in Shawinigan was easy given the quality of the buildings available and possible synergies with local stakeholders, including The National Center for Electrochemistry and Environmental Technologies with whom we are already working,” Guy Bourassa, president and CEO of Nemaska, said.

“We intend to provide skilled jobs here in Shawinigan and do our part to contribute to the economic prosperity of the region,” he added.

The facility will house Nemaska Lithium’s Phase 1 plant and the future commercial hydromet plant that will convert the spodumene concentrate produced at the Whabouchi Mine into high purity lithium hydroxide and lithium carbonate.

Nemaska Lithium had originally planned to build its Phase 1 Plant and Hydromet Plant in Salaberry-de-Valleyfield, Que., but chose Shawinigan due to existing infrastructure and the site’s proximity to the mine.