Freeland, who calls herself an "economic determinist," was the runaway choice of 81 per cent of editors surveyed by The Canadian Press 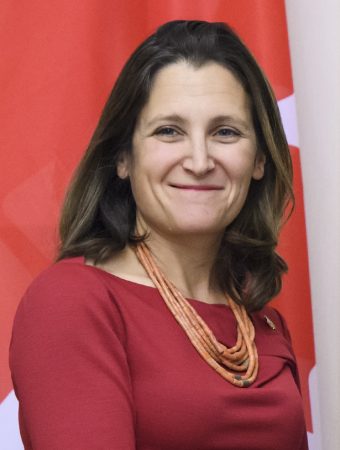 Foreign Affairs Minister Chrystia Freeland took pains to predict that in a lengthy August 2017 speech that spelled out Canada’s goals at the start of the North American Free Trade Agreement talks with Mexico and the volatile Trump administration.

“I chose my words really carefully because you didn’t have to be a rocket scientist to anticipate that there would be moments of drama,” Freeland recalled in an interview.

“We knew there would be moments where we had to fasten our seatbelts, and I think what was important was to be mentally prepared for those moments, and not to be knocked off course by them.”

She was the runaway choice of 81 per cent of editors surveyed by The Canadian Press. Alberta Premier Rachel Notley was second with nearly 10 per cent.

Jeff Labow, an editor with the Globe and Mail’s Report on Business, said Freeland “undoubtedly kept her cool amid all the Trump tweeting, lying, changing his direction and ended up with a deal that can be lived with.”

Hugo Fontaine, business editor of La Presse, said Freeland was the “face and the voice” of the Canadian negotiating team.

Freeland led a spasmodic negotiation that was coloured by the personal insults U.S. President Donald Trump hurled at Prime Minister Justin Trudeau and, ultimately, at her. But Freeland said she was never shaken from her “core conviction” – “what I truly felt from the minute that the president was elected” – that a deal on NAFTA was possible.

“One of our colleagues said to me that somehow I seemed always to be a little bit serene. I wouldn’t say I was serene, but I was always confident.”

Freeland was blindsided when Mexico and the U.S. reached a side deal in August, threatening to sideline Canada unless it joined by the end of September. Freeland cut short a three-country European trip and diverted to Washington where she would spend the better part of the next month on the turf of her American counterpart, United States Trade Representative Robert Lighthizer.

Trump had already injected an unprecedented level of drama into the talks. There was his ever-present threat to rip up NAFTA, his post-G7 insults calling Trudeau “very dishonest and weak,” his frequent broadsides against Canadian farmers and supply management. He imposed punishing tariffs on Canadian and Mexican steel and aluminum and swung a Sword of Damocles threatening to add a 25 per cent tax on all Canadian autos entering the U.S.

In late September, days before the U.S.-imposed deadline, Trump told a freewheeling news conference that he was “very unhappy with the negotiations and the negotiating style of Canada. We don’t like their representative very much.”

“When you’re in a tough negotiation and the other guy complains about the quality of your negotiators, or how tough your negotiators are, that’s not a reason you should be changing your negotiator,” the prime minister said in an interview.

“That’s a reason to buy your negotiator a beer at the end of the day.”

At the time, Freeland held her powder.

Looking back, Freeland said she laid down some markers for herself, and for Canada, early on. She began making preparations for NAFTA as soon as Trump was elected – two months before her promotion from the trade minister’s job to a retooled foreign affairs portfolio that put her in charge of Canada-U.S. trade.

Trump may have had the Art of the Deal, but Freeland had Steve Verheul, Canada’s chief negotiator. Freeland and Verheul played hardball together to nail down the final version of the Canada-EU trade deal in late 2016, travelling to the nether regions of Belgium to stare down a restive constituency known as the Walloons, who were threatening to veto seven years of negotiations with a Byzantine set of constitutional powers.

Heading into NAFTA, Verheul told Freeland they had to remember an important lesson they had learned. “The worst thing in a trade negotiation is to have a weak or uncertain counterparty because then you can’t get a deal,” the minister recalled. “What you actually really want at the other side of the table is someone who is really smart. Because then, at the end of the day, they will be able, together with you, to identify that win-win landing zone.”

Freeland calls herself an “economic determinist.” That boils down to: “if something makes economic sense, it tends to happen.”

So Freeland kept her focus on Lighthizer. The strapping septuagenarian may share Trump’s protectionist ideology, but he was divorced from the drama of his president’s bluster.

“Bob, at the end of the day if you made a logical case to him, a logical case about why something was in his interest to agree to, he would understand that.”

To this day, Freeland said there are things that she and Lighthizer still disagree on.

“But he is a real pro and it became clear to me, I would say pretty early on, that notwithstanding the very great, great differences in our starting positions that he was a guy we would ultimately be able to do a deal with.”

Late in the evening of Sept. 30, as Freeland was with the team assembled in Trudeau’s office across from Parliament Hill, Canada and the United States ended the suspense and announced their 11th hour deal.

Exactly two months later, Freeland was at the G20 summit in Argentina. She and Lighthizer, along with their Mexican counterpart, Ildefonso Guajardo, stood behind the three North American leaders as the new trade pact was formally signed.

“He made a point of that, after the signing. I was always very clear that there would be moments of drama,” Freeland recalled.

That was all well and good, but she reminded herself of yet another cold, hard fact.

“I am paid in Canadian dollars. I work for the people of Canada. And the people whose interests I try, heart and soul to earn, are Canadians’, and it is their judgement to which I answer,” she said.

“That’s the judgement that matters to me.”