Metro to cut 280 jobs in modernization of Ontario distribution network

The Canadian grocer is investing $400 million to overhaul its Ontario logistics. It plans to bring in new automated systems in the wake of the province's planned $15 minimum wage hike 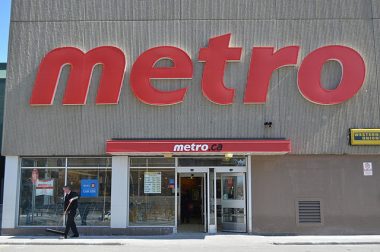 TORONTO—Grocery store chain Metro Inc. says it will eliminate about 280 jobs starting in 2021 as part of a $400-million overhaul of its Ontario distribution network.

The company says the move to modernize and automate its network will mean the loss of about 180 full-time and 100 part-time positions.

The announcement follows comments by Metro in August that it would study automation as it looked to cut costs in the face of the Ontario government’s plan to raise the minimum wage next year.

Metro has six distribution centres in Ontario including four in Toronto and two in Ottawa that employ a total of more than 1,500 workers.

It says its existing distribution network in Toronto no longer meets the needs of its business.

The company plans to modernize the operations in Toronto between 2018 and 2023 with the building of a new fresh distribution facility and a new frozen distribution centre.

“This investment will enable Metro to continue its growth and expansion in the Ontario market,” Metro chief executive Eric La Fleche said in a statement.

“With a new and modernized supply chain infrastructure, we will be even more responsive to the needs of our customers.”