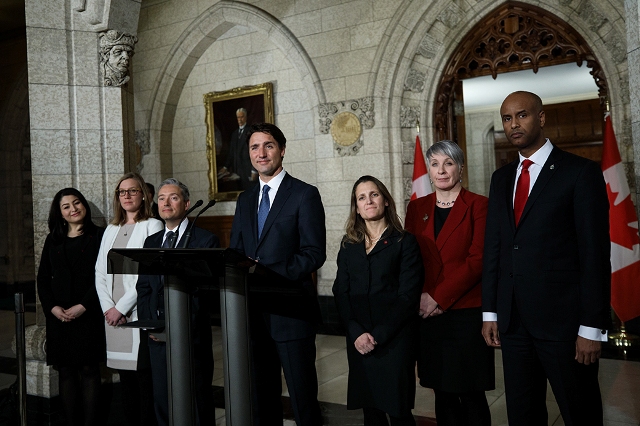 OTTAWA—At a glance, Chrystia Freeland’s background in deconstructing the world’s super-wealthy and pugnaciously critiquing Russia’s president wouldn’t appear to be an ideal resume for the job as Canada’s top diplomat dealing with Donald Trump’s White House.

But as the former journalist was elevated to the post Jan. 10 by Prime Minister Justin Trudeau at a critical moment in global relations, even her Opposition critic across the parliamentary aisle couldn’t find a bad word to say.

Freeland, 48, was the marquee move in Trudeau’s nine-person, six-portfolio cabinet shuffle—and not because she’s in a gender-busting role.

Though she is the first Liberal woman in the role, Freeland is Canada’s third female foreign affairs minister—behind Flora MacDonald, who broke the glass ceiling in 1979, and Progressive Conservative Barbara MacDougall’s two-year stint from 1991 to 1993.

Given Freeland’s colourful resume, that gendered factoid wasn’t even on the radar.

The Oxford-educated Rhodes Scholar was an acknowledged rising star for the Liberals as international trade minister this past year, doggedly completing the CETA trade agreement with the European Union begun by the previous Conservative government. Freeland then graciously shared the credit with her predecessors.

The prime minister said Freeland’s economic credentials made her an ideal choice to replace Liberal veteran Stephane Dion, who has been offered a diplomatic post abroad.

“One the things we’ve seen from president-elect Trump is that he very much takes a trade and job lens to his engagements with this world in international diplomacy,” Trudeau said at an afternoon press scrum on Parliament Hill.

“It makes sense for the person who is responsible for foreign relations with the United States to also have the ability and the responsibility to engage with issues such as NAFTA and the broad range of trade issues that we’ll be facing with our friends and neighbours south of the border.”

Trudeau added that Canada is “one of the few countries these days that seems to be very much pro-trade.”

Freeland, speaking in French—one of her five languages and the one in which, she said, she’s least fluent—said the Canada-U.S. relationship is this country’s closest and most important in the world.

She denied that her incisive deconstruction of the planet’s super-wealthy in her 2012 best-selling book “Plutocrats: The Rise of the New Global Super-Rich and the Fall of Everyone Else” constitutes “baggage” in dealing with a Trump administration packed with billionaires.

Rather, Freeland asserted that the Liberal government’s oft-repeated preoccupation with the middle class is not unlike Trump’s campaign admonitions to make the economy work for average Americans.

Freeland acknowledged Canadian officials, herself included, have had a number of meetings with the Trump transition team but she stressed the United States “has only one president at a time.”

She said the meetings to date involve “laying the groundwork for some personal relationships.”

But it is Freeland’s fractious relationship with Russian President Vladimir Putin that makes her such an intriguing choice.

The Russian and Ukrainian-speaking granddaughter of Ukrainian emigrants was among a dozen Canadians put on a Russian sanctions list in 2014 as part of Putin’s tit-for-tat response to Western sanctions following Russian-backed military incursions into Crimea.

Freeland has called Putin, whom she interviewed during her four years as a Moscow correspondent, an authoritarian, an autocrat and a “really dangerous” force on the international scene.

“I lived in Moscow for four years and really, really enjoyed it and I have a really deep love for the Russian language and Russian culture. I am a very strong supporter of our government’s view that it is important to engage with all countries around the world—very much including Russia.”

She said her background leaves her “well-positioned” to be part of the government’s Russian engagement—notwithstanding her name on Putin’s sanctions list.

The first response from Putin’s representatives in Canada was not antagonistic.

“We hope that the Canadian government will follow its stated intention to further re-engage with Russia in areas of common interest,” Kirill Kalinin, a spokesman for the Embassy of Russia, said in an email.

“We are open to develop bilateral relations on the basis of mutual respect and reciprocity.”

There are “apparent strong differences” between Freeland and Donald Trump’s assessment of Putin, Kent continued, but he said Freeland should be able to champion issues such as softwood lumber, the Keystone XL pipeline and NAFTA without moderating her opinions of the Russian leader.

Veronica Kitchen, an international relations expert at the Balsillie School of International Affairs in Waterloo, Ont., called Freeland a good choice “especially in a world where trade barriers may be going up again.”

“She knows that portfolio both practically and professionally,” Kitchen wrote in an email. “I’m not sure what practical impact her ban in Russia will have.”

Freeland, a mother of three who now calls Toronto home, will have a heavy travel load on her plate—but she’s already experienced life on the road in her job as international trade minister and as an international economics journalist.

Christopher Sands, a Canada-watcher at the Washington-based Center for Strategic International Studies, said he sees Freeland’s biggest asset as her ability at domestic communications.

“Canada’s going to have to be flexible and try to navigate what could be a period of real rapid change, maybe a bit of return to great power conflict with China and so forth,” said Sands.

“But I would say her first and foremost strength—as she showed with CETA—is conveying complex and often frustrating realities about what’s going on abroad to Canadians so that they feel confident that Canadian international engagement is good.”