Labour growth flat, but jobless rate dips to 5.8 per cent as fewer search for work

Experts have predicted wage growth to rise in the tightened labour market, but it has dropped every month since May when it was 3.94 per cent 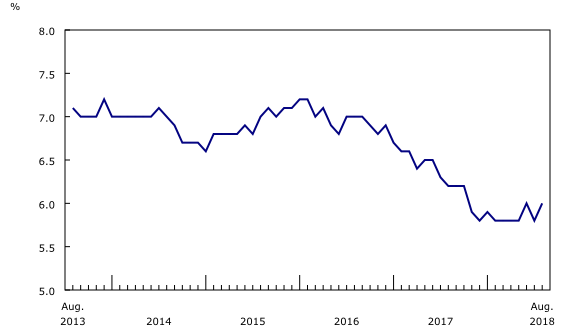 OTTAWA – Canada’s unemployment rate edged back down to its four-decade low of 5.8 per cent last month as job growth was essentially flat and fewer people searched for work, Statistics Canada said Friday.

The latest labour force survey says the country added 11,200 net new jobs in October – including a gain of 33,900 full-time positions – but the numbers were too low for the agency to consider them statistically significant.

A dip in the labour force participation rate helped nudge the jobless rate down from its 5.9 per cent reading in September to match the reading’s 40-year low for the seventh time in last 12 months.

Economists had expected an increase of 10,000 jobs and an unemployment rate of 5.9 per cent, according to Thomson Reuters Eikon.

But even in the strong labour market, wage growth continued along its downward trajectory.

Year-over-year average hourly wage growth, which is closely watched by the Bank of Canada, continued its steady decline in October to 2.19 per cent – its weakest reading since September 2017.

Experts have predicted wage growth to rise in the tightened labour market, but it has dropped every month since May when it was 3.94 per cent.

Compared with 12 months earlier, national employment was up 1.1 per cent following the addition of 205,900 positions, including 173,000 full-time jobs.

Saskatchewan added 2,500 jobs in October, but employment levels were largely unchanged in the other provinces.

By industry, the goods-producing sector lost 12,000 jobs last month in a decline led by a notable loss of 7,100 positions in natural resources work.

The services sector added 23,200 jobs in October following a gain of 22,000 positions in business, building and other support services.