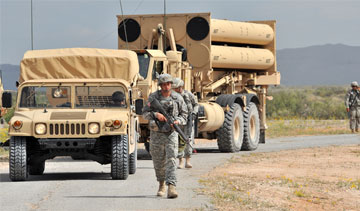 WASHINGTON—An influential House committee chairman will press his case on Monday for a $705 billion defence budget in 2018, more military spending than at any point during the wars in Iraq and Afghanistan and a level even a number of his Republican colleagues don’t support.

Rep. Mac Thornberry of Texas, who heads the Armed Services Committee, argues the sharp increase is badly needed to repair a military that’s been at almost continuous combat for a decade and a half. He’ll unveil a blueprint that proposes $37 billion above the $603 billion than President Donald Trump requested for core Pentagon operations along with another $65 billion for warfighting missions.

But Thornberry is at odds with fellow Republicans over how much the Pentagon should get in the fiscal year beginning Oct. 1. Conservatives who dominate the Budget Committee agreed last week on a budget outline that promises $620 billion for the core military budget that pays for weapons, training and troop salaries. That’s $20 billion less than Thornberry wants.

The two committees, along with senior GOP members of the appropriations panel, have been meeting behind closed doors in hopes of breaking the impasse. Thornberry said he’s willing to accept a lower number, but only if he’s assured the Pentagon will no longer be hamstrung by a herky-jerky budgeting process that leaves the armed services unsure of how much they’ll get each year and when the money will arrive.

Squarely in the sights of Thornberry and other defence hawks on Capitol Hill is a 2011 law that strictly limits defence spending. If the budget caps mandated by the Budget Control Act are breached, automatic spending reductions known as sequestration are triggered. They’ve been pushing for the law to be repealed, but that won’t happen without help from Democrats who want limits on domestic spending erased.

“If we can get to a point where we don’t have these draconian cuts hanging over our head there is value to that,” says Thornberry, whose committee will craft the sweeping defence authorization bill this week.

Thornberry criticized Trump’s maiden Pentagon’s budget as inadequate, but he refused to blame the president for the shortcomings. The defence budget sent to Congress last month was essentially what former President Barack Obama would have proposed, he said.

“There wasn’t anybody at DOD to write a Trump budget request,” according to Thornberry. “I have no doubt that our president wants to repair and rebuild our military.”

Yet the Trump administration is almost entirely responsible for the skeleton crew at the Pentagon. There are dozens of top-level jobs that require Senate confirmation before they can be filled, but Trump, in office since late January, has nominated just 20 so far. Six have been confirmed, including Defence Secretary Jim Mattis, while a dozen or so others await approval, according to figures maintained by the Senate.

Thornberry’s blueprint recommends an increase of just over 18,000 active-duty troops for the Army, Air Force and Navy. The Army, with 10,000 new service members, would be the largest beneficiary of the boost. Overall, the plan envisions a full-time fighting force of 1.3 million.

The plan provides a 2.4 per cent pay raise for the troops, which is slightly higher than the wage hike the Pentagon had proposed. Mattis defended the lower amount during a committee hearing earlier this month, telling lawmakers that the salaries of U.S. service members are competitive with the private sector.

“We probably have a better benefits package than most places,” Mattis added.

But Thornberry told reporters last week that U.S. troops are entitled to a “full” pay increase. He also had grappled with the Obama White House over pay levels. The Obama administration had maintained that boosting troop salaries even a half-percentage point would cost hundreds of millions of dollars and upset the balance between fair pay and the ability to provide cutting-edge equipment and training.

The plan aims to reverse the $340 million cut made in the Trump budget to missile defence programs. Thornberry said he was “astonished” by the proposed reduction, citing the potential threat the U.S. faces of a missile strike by North Korea or Iran. He’s seeking more money for interceptors that can bring down incoming missiles and money for investment in missile defence research.

Thornberry’s committee rejects Mattis’ bid to begin a new round of base closings in 2021, a move the Pentagon chief said would save $10 billion over five years. The Obama administration had sought to shutter excess bases too, but also was rebuffed by Capitol Hill. Military installations are prized possessions in congressional districts.

Lawmakers have questioned the data and the analysis the Pentagon has used to make its arguments for fewer facilities. They’re also skeptical of the alleged savings, noting that there are substantial up-front costs required to close bases down.