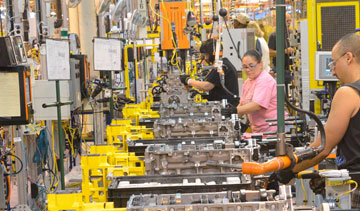 Employees are concerned about a pending takeover of the struggling plant. PHOTO General Motors

PARIS—The maker of Peugeot and Citroen cars has resorted to using helicopters to retrieve car parts from a French factory blockaded by workers worried about their jobs.

Employees at the factory run by GM&S are seeking better conditions in a pending takeover of the struggling site. GM&S is a supplier for carmaker PSA Group, which has promised 40 million euros ($45 million) in contracts and investment to keep the plant afloat.

PSA spokesman Pierre-Olivier Salmon said the blockade could force the carmaker to reconsider its funding proposals and that two helicopters are retrieving equipment from the plant in the town of Sept-Fons until a solution is found.