Though the two men held similar roles, they shared no particular kinship 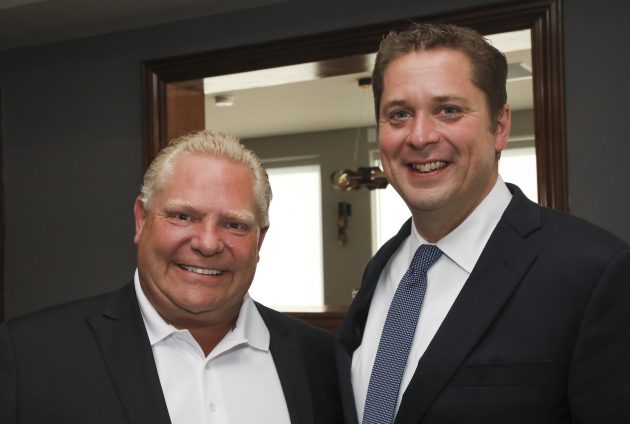 TORONTO – Doug Ford wished Andrew Scheer all the best Thursday after the federal Conservative leader announced his resignation – but Ontario’s populist premier will not be among those vying for the job.

Ford stuck to pleasantries after Scheer announced he will step down as Conservative leader as soon as a successor can be chosen. He will stay on as an MP.

“I wish Andrew Scheer all the best as he undertakes this new chapter in his life, and thank him for his service as the head of her Majesty’s Loyal Opposition and leader of the Conservative Party,” Ford wrote.

“I also want to take this opportunity to give my best wishes to Mr. Scheer’s wife Jill and their five children.”

A spokeswoman for the premier said Ford is not interested in Scheer’s job, as he is focused on Ontario.

Though the two men held similar roles, they shared no particular kinship. They appeared together in public a handful of times before the election, such as at party conventions, and were friendly. But by the time the campaign rolled around, it was clear the federal Tories had deemed Ford persona non grata.

Ford’s Progressive Conservatives won a majority government last summer after a campaign powered by populist promises such as cheap beer, cheaper gas and lower taxes. But his cuts to services and programs such as legal aid, student loans, public health and even tree- planting have angered many in the province.

According to one poll released Thursday, Ford’s approval rating is up slightly, though still the lowest among the country’s premiers, at 28%. Another survey had Ford’s approval at 37% – also up, and not at the very bottom of the list.

Prime Minister Justin Trudeau took full advantage of the leaders’ uneasy relationship during the campaign, constantly linking Ford and his unpopularity to Scheer, though Scheer would not take the bait. The federal Tory leader did not appear with Ford during the campaign, barely even uttering his name. The party even had Alberta Premier Jason Kenney actively campaigning for Scheer in Ford’s own neighbourhood.

Ford himself kept an extremely low profile, making few public appearances and avoiding questions from reporters, save for two events in northern Ontario.

“I think that was a calculation by Mr. Scheer’s team to frankly to be able to allocate blame where maybe there wasn’t any,” she said.

“Ontario has always and must play a role in any government, anybody who wants to form government in Ottawa. I frankly don’t think that Doug Ford would in any way would hinder that ability, and hiding him during the campaign was a big mistake.”

Lantsman, who recently wrote an op-ed critical of Scheer’s position on LGBTQ issues, said the two politicians have very different styles, with Ford focused on people, and Scheer focused on movements.

“That is the big difference about why Ontarians voted for somebody like Ford, and sort of resoundly rejected somebody like Andrew Scheer.”

The Conservatives failed to make the needed gains in Ontario in the election, particularly in the key Greater Toronto Area.

Amanda Galbraith, a principal at communications firm Navigator and a former Conservative staffer, said Ford’s approval rating was so low that Scheer didn’t really have an option other than to avoid Ford during the campaign.

Ford himself was likely not pleased with Scheer’s avoidance, Galbraith said, but he has been magnanimous since, making only positive public statements.

“I can’t imagine anybody wants to be told, ‘I don’t want to be standing next to you, seen with you, or utter your name for six weeks,”’ she said. “But he’s the premier of Ontario and guess what: he was there before this election campaign and he’s the last guy standing.”