The plant, which makes the Ford Focus and C-Max hybrid, will move from three shifts to two starting in June 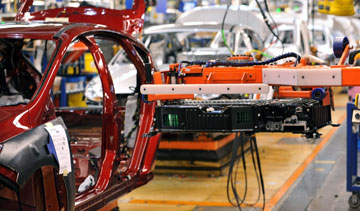 This announcement marks the first time since 2009 that Ford has cut a shift at a U.S. plant. PHOTO: Ford

DETROIT—Ford Motor Co. is laying off 700 workers at a Michigan assembly plant because of slow sales of the small cars and hybrids it makes.

The Michigan Assembly Plant, in the Detroit suburb of Wayne, will move from three shifts to two starting June 22, spokeswoman Kristina Adamski said. The plant, which makes the Ford Focus and C-Max hybrid, has been operating on three shifts since 2012.

The plant is the same one President Barack Obama visited in January to hail the resurgent U.S. auto industry. But even during that visit, the plant was temporarily shut down to prevent overproduction of the slow-selling cars. The plant also makes electric versions of the Focus and C-Max.

It’s the first time since 2009 that Ford has cut a shift at a U.S. plant. Automakers have been in growth mode since the recession, adding thousands of workers to meet strong U.S. demand for new cars. Ford has added 14,000 workers to its U.S. plants over the last four years.

But as annual sales near their historic peak of 17 million, automakers aren’t going to keep seeing the same big sales gains they enjoyed coming out of the recession. Lower gas prices also hurt sales of the fuel-efficient Focus and C-Maxe. Focus sales fell 6 per cent last year, while C-Max sales dropped 22 per cent.

Ford says 675 assembly line workers and 25 salaried workers are affected. They will be laid off in three waves between June and September.

Some workers will immediately transfer to other plants to cover summer vacations. Ford expects most will find jobs at other Michigan Ford plants by next spring. One nearby plant is struggling to meet demand for Ford’s new F-150 pickup. Another is making the Ford Mustang on two shifts but could increase that to three if overseas demand for the Mustang is strong.

Jimmy Settles, who leads Ford negotiations for the United Auto Workers union, said the shift reduction was unfortunate but not unexpected.