The workers were employed by a company that rounds up chickens on more than a dozen B.C. farms that supply a meat processing plant near Vancouver 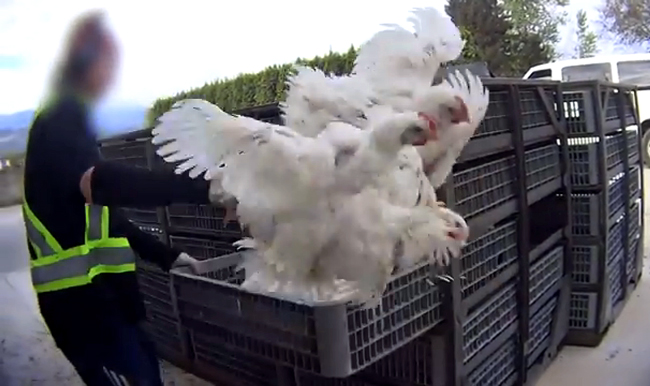 Chilliwack-based Elite Services says it has fired five employees, one of whom was a supervisor. PHOTO: Mercy For Animals/YouTube

Dwayne Dueck, president of Elite Services based in Chilliwack, says in a statement the company is taking “immediate corrective action” and one of the fired employees was a supervisor.

“Elite Services understands the importance of ensuring the proper care and handling of animals. Proper handling techniques help maintain production quality and effectively reduce stress on the animals,” he said in a statement issued June 13.

“We are sickened with the footage and want to ensure all our suppliers and producers that this is not reflective of who we are, our fundamental beliefs or behaviour we accept from our employees.”

The SPCA in British Columbia has launched a formal investigation.

Lindsay Wolf, vice-president of investigations with the group Mercy For Animals, says the abuses were captured by a whistleblower working for the company that supplies services at more than a dozen factory farms in the Fraser Valley.

Wolf said the birds were slaughtered at a plant in the Vancouver suburb of Port Coquitlam before they were shipped to Loblaws and Loblaws-owned stores.

“The shocking video footage we obtained showed workers hitting, kicking and throwing birds, and smashing them into walls and transport crates,” Wolf said in a conference call from Toronto.

“Birds are run over by forklifts and crushed by transport machinery.”

It wants grocery giant Loblaws to ensure the welfare of animals in its supply chain.

Loblaws said it is investigating.

“We stand firmly behind the standards set by the National Farm Animal Care Council, the policies outlined by the Chicken Farmers of Canada, and our own commitment to animal welfare which is clearly articulated in our supplier code of conduct, and in our animal welfare principles,” it said in a statement.

“We continue to work with industry partners and animal welfare experts to ensure standards and codes of practice are upheld so our customers can remain confident in the food they buy.”

Loblaws said it has told its supplier, Ontario-based Sofina Foods Inc., that it has “zero tolerance for any kind of animal abuse.”

Sofina said it has reviewed the “horrifying footage” allegedly taken of the company it contracted to catch chickens at its facilities in British Columbia and it is “appalled and extremely shocked” by it.

“Ethical and responsible treatment of animals is of utmost importance to our organization,” it said.

“We are taking immediate steps with our supplier to initiate a comprehensive investigation of the situation and have engaged internal and external expertise to help us determine proper course of action in line with our animal care commitment and expectations.”

The whistleblower, who is a volunteer with Mercy For Animals, was hired by Elite Services and witnessed abuse soon after being hired, Wolf alleged, adding a hidden camera was used to capture the video.

SPCA spokeswoman Marcie Moriarty said its investigation started after the society received undercover video, which she said was shot by the animal advocacy group between May 10 and June 9.

“The video includes some of the most brutal and sadistic acts of violence against animals I have ever seen,” she said. “It is extremely difficult to watch.”

Investigators with the SPCA are working on a report that will be forwarded to Crown counsel.

Moriarty said they will recommend multiple charges of animal cruelty under both the Criminal Code and the Prevention of Cruelty to Animals Act. She said convictions carry a fine of up to $75,000, a maximum five-year prison sentence and possible bans for life from owning or being around animals.