200,000 were told to flee earlier this week as engineers warned a spillway at the U.S.'s tallest dam could fail; they are now returning home, but if repairs don't hold, another mass evacuation could follow 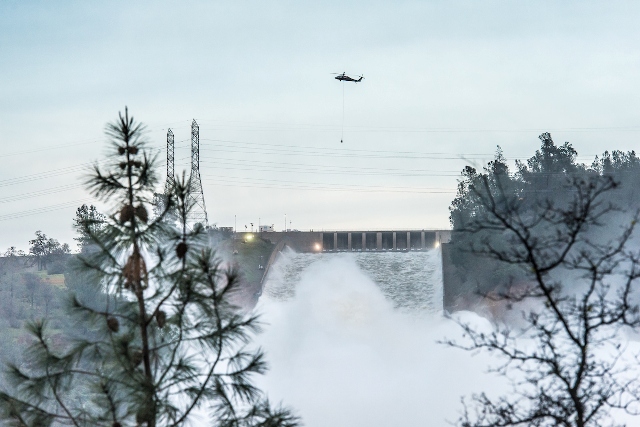 OROVILLE, Calif.—The stress of evacuation and an uncertain future were enough for Donald Azevedo and his family to opt to stay a few more nights in an emergency shelter rather than risk having to do it all again.

The family was among the nearly 200,000 Californians who live downstream from the country’s tallest dam who were told they could return home but warned they may have to flee again if repairs made to the battered Oroville Dam spillways don’t hold.

The fixes could be put to their first test later this week with the first of a series of small storms forecast for the region expected to reach the area Wednesday night.

“There is the prospect that we could issue another evacuation order if the situation changes and the risk increases,” Butte County Sheriff Kory Honea said Feb. 14, telling residents they could return home but to remain vigilant.

That’s why Azevedo wasn’t budging yet.

“I’m not trying to risk traffic, being stuck in floods. I’m safe where I’m at,” Azevedo said.

Alternatively, many other evacuees couldn’t wait to get back home.

Residents living below the Oroville Dam were suddenly ordered to evacuate Sunday afternoon after authorities had assured them for nearly a week that the dam was sound despite a gaping and growing hole found in the structure’s main spillway. The order came after authorities feared an earthen emergency spillway used when the lake behind the dam overflows its capacity appeared ready to fail Sunday because of erosion.

Over the weekend, the swollen lake spilled down the unpaved emergency spillway for nearly 40 hours, leaving it badly eroded. The problem occurred six days after engineers discovered a growing hole in the dam’s main concrete spillway.

State and federal officials ignored calls in 2005 from environmental groups to armour the earthen spillway in concrete to prevent erosion. Federal regulators concluded the earthen spillway could handle a large amount of overflow after water agencies that would have had to pay for the upgrade argued it was unnecessary.

Others fear the real test is still to come in the weeks ahead when a record amount of snowfall melts in nearby mountains.

The California Department of Water Resources said Tuesday night the Oroville Dam’s water levels continued to decrease but it didn’t say by how much.

State water officials said earlier Tuesday the reservoir’s water level had been reduced 15 feet by Tuesday afternoon. Officials hope to continue using a damaged main spillway to drain the lake another 37 feet in preparation for coming rain. They say they have drained enough water that the emergency spillway will not be needed to handle runoff from the approaching storm.

Forecasts call for 2-4 inches of rain and snow in the foothills and mountains starting Wednesday night. But the storm was looking colder than initially projected, meaning less rain and less runoff than last week’s storms.

Dozens of construction crews were working around the clock dropping 1,200 tons of material on the earthen emergency spillway per hour using heavy equipment and helicopters and the area is being continually monitored with the help of drones carrying cameras, the state water agency said.

Preliminary estimates say permanently fixing the hole in the main spillway could cost $100 million to $200 million, Croyle said. Experts are drawing up plans for repairs that will begin after the spring runoff season ends.

State officials clearly were on the defensive about their decision to call for mass evacuations Sunday, just a few hours after saying the situation was stable, forcing families to rush to pack up and get out.

Honea, the county sheriff, said Tuesday that the call to order nearly 200,000 people to higher ground protected lives and bought time for water experts to address the problems.

But after two days away from home, tens of thousands of evacuees were growing weary. They welcomed the news they could return home but vowed to heed the sheriff’s warning to remain vigilant.

Rod Remocal said he and his wife would now be ready to leave their Biggs home near the dam at a moment’s notice after fleeing in a rush Sunday.

“We’re all coming back and pack and be ready this time,” Remocal said. “This time we’re going to be on call like they said.”