Ethics watchdog: PM didn’t violate conflict rules over WE Charity, but Morneau did 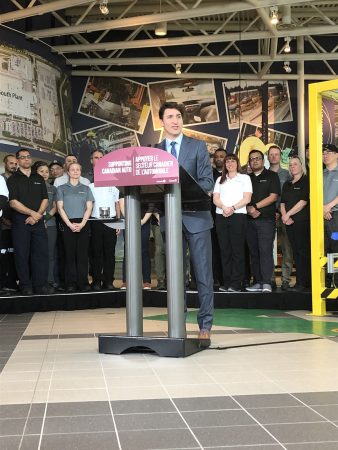 OTTAWA — Prime Minister Justin Trudeau has been cleared of any wrongdoing in the WE Charity affair by the federal ethics watchdog but opposition parties aren’t willing to let the politically fraught controversy drop just yet.

Ethics commissioner Mario Dion ruled that Trudeau did not breach the Conflict of Interest Act when he failed to recuse himself from a cabinet decision last spring to have WE Charity administer a since-cancelled student services grant program.

However, in a separate report, Dion said former finance minster Bill Morneau did break the rules by failing to recuse himself and by showing preferential treatment to the charity, co-founded by his friends Craig and Marc Kielburger.

Trudeau expressed satisfaction with the ruling on him, saying it “confirms what I have been saying from the beginning.”

“At the heart of this initiative was getting support for youth during this pandemic as fast as possible,” he said in a statement.

But Conservative Leader Erin O’Toole suggested Trudeau got off on a technicality and promised, if he forms government, to introduce tougher rules that close loopholes and impose penalties for breaking the Conflict of Interest Act.

“Canadians are tired, Canadians are frustrated by the culture of entitlement and corruption that surrounds the Trudeau government,” he said.

NDP ethics critic Charlie Angus zeroed in on the Morneau report, calling it a “doozy” and indicative of a government that gives “blatant insider access for their cronies and their pals.”

Bloc Quebecois Leader Yves-Francois Blanchet issued a statement saying he respects Dion’s decision but adding that “the final judgment will rest with the voters.”

The WE affair has bedevilled the Liberal government since last summer, when it decided to pay the charity up to $43.5 million to administer a volunteer student grant program, which was initially budgeted to cost an estimated $912 million.

Although the contract specified that WE was not to make any profit from the arrangement, the decision prompted immediate controversy due to the charity’s close ties to Trudeau and his wife as well as to his mother and brother, both of whom had been paid to appear at some WE events over the years.

Morneau, whose daughter worked for the charity and who had made generous donations to it, also came under fire.

Both Trudeau and Morneau apologized at the time for not recusing themselves from the decision. WE Charity quickly withdrew from the program, which was eventually cancelled.

Nevertheless, various House of Commons committees launched investigations into the affair, some of which are ongoing.

In his report on Trudeau, Dion confirmed Trudeau’s version of events: that the choice of WE to manage the program was recommended by bureaucrats, that the prime minister initially balked at the idea and asked that they look for alternatives, and that he eventually signed off on the matter after bureaucrats determined WE was the only organization capable of managing the cross-country program.

“I believe that in the frenzy to distribute funds as expeditiously as possible to those affected by the COVID-19 pandemic, there were some departures from the ordinary process of policy development,” Dion said.

“In my view, the creation and eventual ratification of the (Canada Student Services Grant) was not done improperly.

Dion concluded that there was no friendship between Trudeau and the Kielburgers, that Trudeau did not give them preferential treatment and that neither he nor his relatives stood to benefit, even indirectly, from the decision to have WE administer the program.

Dion arrived at a very different conclusion for Morneau, who abruptly quit politics in August as the WE affair dominated headlines and reports circulated about a disagreement between him and Trudeau over COVID-19 pandemic spending.

Dion said Morneau “gave WE preferential treatment by permitting his ministerial staff to disproportionately assist it when it sought federal funding.”

“I believe this unfettered access to the Office of the Minister of Finance was based on the identity of WE’s representative, Mr. Craig Kielburger,” Dion wrote.

Dion found Craig Kielburger fell under his office’s interpretation of a friend to Morneau, which meant the former minister should have known it created the potential for conflict.

He noted that in 2017 Craig Kielburger wrote to Morneau that he and his spouse were expecting a baby and he was “among the first to know.”

Other emails show Morneau’s staff referred to Kielburger as a “dear friend” of the office, that communications between ministerial staff and WE representatives happened on a first-name basis and included colloquialisms like “Hey friend.”

Dion said Morneau put himself in conflict several times, had the opportunity to “improperly further WE’s private interests” and should have recused himself from debate on the program as soon as he learned that WE would play an important role in it.

In a written statement, Morneau said the report concludes the public service decided WE Charity should administer the program.

“As I have already stated, in retrospect, I should have recused myself from the discussion,” Morneau wrote in a statement shared on Twitter.

A statement from WE Charity said Dion has confirmed the choice to give the contract to the organization “was subject to extensive scrutiny and that WE Charity was the only organization equipped” to manage the program.

The charity’s lawyer, Guy Giorno, one-time chief of staff to former Conservative prime minister Stephen Harper, commended Dion for giving Trudeau and Morneau due process, which he said has been denied the charity during committee hearings.

The charity is now shutting down its Canadian operations largely as a result of the controversy.

Last fall, Dion cleared Morneau of failing to disclose a gift from the charity. He accepted that the former minister “genuinely believed” he had paid for two trips his family took in 2017 to visit WE’s humanitarian projects in Ecuador and Kenya, saying Morneau reimbursed it $41,000 after learning the charity had covered his expenses.

This marks the third time Trudeau has been investigated by the federal ethics commissioner.

In 2019, Dion concluded Trudeau did violate the rules the year before by improperly pressuring then-attorney general Jody Wilson-Raybould, now an Independent MP, to halt the criminal prosecution of the Montreal engineering giant SNC-Lavalin.

Dion’s predecessor, Mary Dawson, earlier found Trudeau broke the rules when his family accepted a 2016 vacation at the private island in the Bahamas owned by the Aga Khan.