Harrison's surprise decision to step down five months ahead-of-schedule has fuelled speculation about an opportunity with a competing U.S. railway 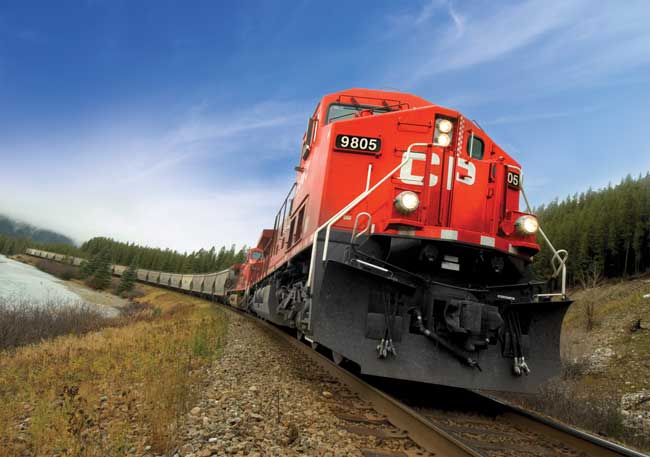 72-year-old Hunter Harrison has sat at the head of CP Railway since 2012. He also led CN Rail before retiring in 2009. PHOTO: CP

CALGARY—Hunter Harrison has struck a surprise deal to step down as CEO of Canadian Pacific Railway Ltd. five months ahead of schedule, apparently so he can take a job with a competing railroad.

The railway said in a news release after markets closed Jan. 18 that the 72-year-old would give up benefits and stock options worth up to $118 million, including forfeiting his CP Rail pension, in return for cancelling his non-compete agreement and allowing him to “pursue opportunities involving other Class 1 railroads.”

It said he would leave his post immediately and would not accept a three-year consultant’s role announced last summer when his retirement date was given as July 1, 2017.

Analyst Walter Spracklin of RBC Dominion Securities said the list of potential employers for Harrison is lengthy but likely doesn’t include Canadian National Railway, the Montreal-based company that he led until retiring in 2009, or Norfolk Southern, the U.S. railroad that fought off CP Rail’s $30-billion takeover attempt last year.

Spracklin speculated in a note to investors the leading contender is Florida-based railroad CSX, whose chairman and CEO Michael Ward has said he plans to retire in 2019.

Spokesmen for Norfolk Southern and CSX each said their railways wouldn’t comment on speculation.

Harrison didn’t take part in a conference call with financial analysts to discuss fourth-quarter results later on Wednesday. Neither president and chief operating officer Keith Creel _ tapped to take over from Harrison nor chairman Andrew Reardon would give details about why the succession plan has been accelerated.

“I fully understand that many of you may have questions regarding Hunter’s decision to retire and Keith Creel’s transition into the role as CEO a few months early,” Reardon said on the call.

“But it’s important to remember that we have been preparing for this seamless leadership transition since Keith arrived in 2013.”

He then said Harrison’s time at CP Rail will be recalled by some as “the greatest corporate turnaround in history.”

Canadian Pacific said in its statement that Harrison will take vacation leave until Jan. 31, when Creel will become CEO and fill in for Harrison until then.

“Leaving CP is bittersweet,” said Harrison in the statement. “I have had a wonderful experience and depart with many friends and with full confidence in Keith’s ability to build on the great success we have enjoyed.”

Under Harrison, who had to give up his CN pension and stock options when he came to Canadian Pacific in 2012, the railway has reduced staff by more than 6,000. It reported Wednesday it had 11,700 employees as of Dec. 31, down 10 per cent or 1,160 jobs from a year earlier.

Harrison also vowed to improve the railway’s ratio of revenue to operating expenses. CP Rail reported Wednesday its lowest-ever fourth-quarter operating ratio of 56.2 per cent and a record low full-year ratio of 58.6 per cent.

CP Rail reported fourth-quarter net earnings of $384 million, up 20 per cent from $319 million a year earlier. On a diluted adjusted per share basis, it earned $3.04, missing analyst estimates of $3.16, according to data compiled by Thomson Reuters

For the three months ended Dec. 31, the Calgary-based railway’s revenue fell three per cent to $1.64 billion from $1.69 billion in the fourth quarter of 2015, attributed to lower shipments of crude oil and grain and extreme winter weather conditions in Vancouver-area shipping centres. Analysts had expected $1.65 billion.

On the call, Creel said Canadian Pacific would post adjusted diluted earnings per share growth “in the high single-digits” during 2017, setting the bar slightly lower than analyst consensus expectations of 11.5 per cent.