Even Bran Wall's enduring approval not untarnished in latest Angus Reid poll; most Canadian premiers endorsed by less than half of voters 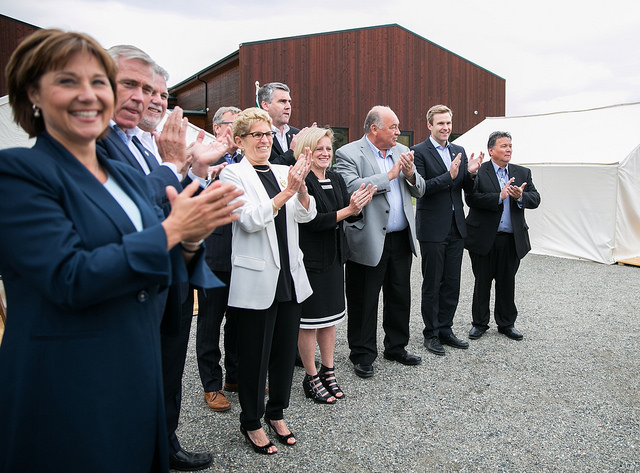 Canada’s premiers at a summit in Whitehorse earlier this year. PHOTO: Queen’s Printer for Ontario, via Flickr

TORONTO—Saskatchewan Premier Brad Wall dropped a full nine points in the most-recent Angus Reid Institute poll gauging Canadians’ approval of their provincial heads of government—but the long-serving Saskatchewan Party head still has a four point edge over any other premier in the country, and a significantly larger lead over most others.

Wall’s approval rating took the serious hit over the summer as the unpopular privatization of telecommunications company Sasktel continues to move forward. His approval sits at 57 per cent—a new low, and the first time in five years that less than three in five of his constituents support him.

Brian Pallister, the relatively newly-elected Manitoba premier, occupies the second position, with 54 per cent saying they approve of the new Conservative government, which swept to power in an election rout earlier this year.

The remaining premiers rated by Angus Reid have fewer reasons to celebrate.

In Ontario, Premier Kathleen Wynne’s approval continues to plumb new depths. The head of Canada’s largest province now has the support of just 20 per cent of Ontarians. Among a host of other issues, the contentious privatization of public utility Hydro One has weighed on her approval. Earlier this week Wynne was booed by the crowd several times while making a speech at the International Plowing Match. Wynne is now the least popular premier in the country.

Edging her out by just one point, Newfoundland and Labarador’s Dwight Ball has the support of 21 per cent of the small, austerity-hit East Coast province. In Nova Scotia and New Brunswick, Premiers Stephen McNeil and Brian Gallant saw statistically insignificant declines in their approval over the summer months. McNeil has a 38 per cent approval rating, while Gallant sits at just 24 per cent.

One step west in Quebec, Premier Phillippe Couillard saw his approval rating erode by 5 per cent last quarter; it now sits at 28 per cent.

Grappling with a wide range of economic issues, Notley’s job approval now stands at 31 per cent. Though virtually unchanged since the spring—it dropped just a single percentage point—she had the approval of a full half of Alberta last August. Clark, on the other hand, enjoyed a seven point bump in the latest poll. Though her imposition of a 15 per cent tax on foreign home buyers in the Metro Vancouver area seems to have bolstered her lagging numbers, nearly two in three in B.C. still oppose her.