Automation could cancel out millions of jobs, but these experts have some solutions

Researchers from around the world are trying to tackle the pending problem of robots taking over for workers on a huge, global scale; some ideas are better than others 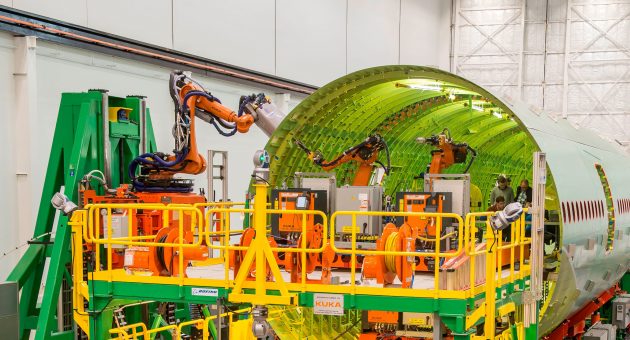 Kuka’s technology would help it boost manufacturing efficiency, but that efficiency mat come at the expense of paying jobs for people.

WASHINGTON, Wash.—Everyone’s talking about problems hurting workers. In the last U.S. election, Donald Trump and Hillary Clinton argued about reasons for a historic disruption in the labour market. The Canadian government will explore it in its March 22 budget.

The issues are well known. With inequality already rising in most of the industrialized world, and a long-term decline in labour-force participation, particularly in the U.S., fast-improving automated technologies are rolling in to obliterate jobs—potentially millions in the transportation sector alone.

So how about solutions?

Some ideas from experts on the disruptive potential of artificial intelligence:

A job mortgage
Imagine a new financial instrument like a student loan, with major differences: Designed for mid-career apprenticeships, it comes with a guaranteed job, provides very specific training and it doesn’t cost taxpayers a dime.

The idea comes in a thought-provoking book from a Silicon Valley innovator who is now teaching at Stanford University about the changes he foresees from AI.

In “Humans Need Not Apply,” Jerry Kaplan warns that ever-accelerating innovation might bring great benefits to society but also legions of dispossessed workers and instability, without a careful transition.

He proposes ideas that aren’t stuck in old political debates of left-versus-right. For example, this Hillary Clinton supporter sees the job-mortgage idea as similar to one from conservative economist Milton Friedman in the 1950s.

How it would work: A company needs people trained in a new 3D printing process. It finds the right candidate—a laid-off manufacturing worker. It offers a job contract on the condition that worker gets trained. The worker takes that contract to the bank and requests a $20,000 loan to help weather the transition. If anyone defaults, they get penalized.

The company designs a specific training curriculum. It’s perhaps delivered by a for-profit partner like Udacity, a startup that offers so-called nanodegrees—occasionally promising a money-back guarantee of a job from one of its corporate partners.

Kaplan says the government can set the regulations. But it could face some jurisdictional challenges. In Canada, the feds write banking regulations but job certification comes from the provinces and industry groups.

Otherwise, Kaplan says in an interview: “The government need not even get involved. It just gets out of the way and sets up the right incentives for private parties to finance education, just as it sets up the right conditions for banks to loan you money to buy your house.”

Career clusters
What if we stopped preparing for specific jobs and started preparing for broader job categories? That’s the idea in an Austalian study by a government-affiliated non-profit.

The Foundation for Young Australians analyzed 4.2 million job postings for its report, “New Work Mindset,” and mapped out clusters of jobs that require similar skills.

It named seven job types: generators, informers, co-ordinators, carers, technologists, designers, artisans. So for instance, a designer could plan to be an architect but wind up taking courses on building inspection. An artisan might be a bricklayer with side training in cabinet-making _ in case there’s a shortage of bricklaying work.

The report says: ”Our mindset needs to shift to reflect a more dynamic future of work where linear careers will be far less common and young people will need a portfolio of skills.“

It doesn’t need to be called a robot tax. Technology writer Martin Ford’s “Rise of the Robots” says the general idea involves shifting the fiscal burden—away from personal taxes, toward capital.

“We eventually will have to move away from the idea that workers support retirees and pay for social programs, and instead (decide) that our overall economy supports these things.”

Kaplan calls for new fiscal architecture. One idea: a negative tax rate for certain volunteer work. Another involves a new public benefit index for things like hedge funds. The more investors they include, the lower the taxes.

Information sharing
In his final presidential address, Barack Obama warned of jobs being stolen—not by foreigners, but by robots. This after the country has just clawed back 900,000 manufacturing jobs, after losing millions in recent decades.

University researchers and government agencies like NASA share intellectual property with companies in the hope they’ll hire in the neighbourhood. For instance, the one in Youngstown, Ohio, shares information and equipment related to 3D printing.

Obama’s former adviser, Vikrum Aiyer, explains that another hub, on textiles, is developing smart fabrics—hospital gowns and military uniforms that read vital signs, and communicate them to doctors and commanding officers.

“We’ve started to hear the roar of U.S. manufacturing coming back,” Aiyer said.

Canada’s finance minister has been urged to create a different kind of partnership. It came from a council of advisers led by McKinsey’s Dominic Barton. They proposed creating a FutureSkills Lab—to gather information on labour-market trends, with different levels of government, companies, unions and non-profits co-operating to help workers upgrade skills.

The council pointed to other programs—like Singapore’s, where everyone over 25 gets a $500 credit for training. Finance Minister Bill Morneau has been examining the report for ideas; it’s unclear how many will end up in the budget this week.

Universal basic income
The best-known, most hotly debated of these ideas. It has supporters and critics on both the left and right. Some conservatives like guaranteed income as a substitute for other welfare programs. Sen. Marco Rubio has proposed a modest version for the U.S. Libertarian economics legend Friedrich Hayek endorsed it long ago.

Manitoba’s NDP government launched a pilot project in the 1970s, which was spiked by its Conservative successors. Ontario’s Liberals are now planning a similar experiment. It’s popping up in the federal NDP leadership race. The Finnish government has a pilot project.

Ford’s book lists potential problems: A disincentive to work, and the possibility of housing inflation gobbling up new income. But he favours it for its benefits: Boosted consumer demand, and a safety net that allows workers to take a leap into new careers.

Related Stories
Automation tech could impact half of all jobs in some countries by 2040, says BoC official
40 per cent of Canadian jobs could be lost to automation, McKinsey chief says
Siemens teams up with CME for youth skills training plan
Automation not an ‘imminent threat’ to Canadian job market, C.D. Howe says
Manufacturing In Focus