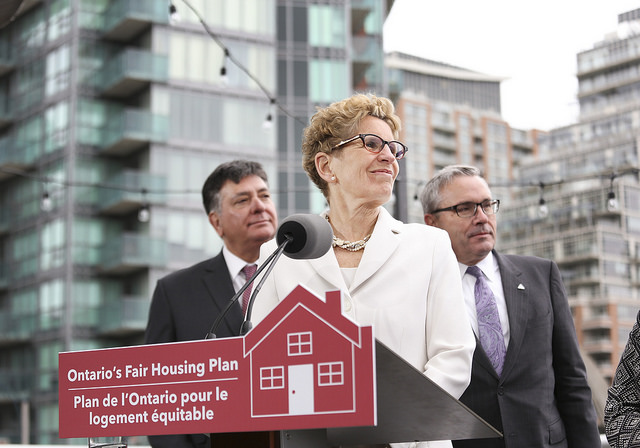 Wynne has been going after the NDP as the party has risen in the polls. PHOTO: Premier of Ontario Photography/Flickr

Speaking at an election campaign stop in Toronto, Wynne said that while she believes in the collective bargaining process, the government needs a tool to use when that process hits a wall.

“So (NDP Leader Andrea Horwath) is saying she would take that tool off the table,” she said.

“It’s that kind of impracticality, when you ask me what the indication, those are the indications their plan is not workable and people need to examine that.”

Both the Liberals and the Progressive Conservatives have escalated the attacks against the New Democrats as polls suggest they are tied with the Tories for the most support.

Horwath told the Toronto Star that she couldn’t imagine a scenario in which she would use back-to-work legislation, as the Liberal government did to end a five-week strike by college faculty last year.

The Liberals introduced legislation just before the election campaign to end a strike by contract staff at York University that began March 5, but the NDP didn’t support it.

Horwath said Wednesday labour strife in the education sector can be avoided by properly investing in the system, adding the Liberals shouldn’t be giving anyone lessons on how to avoid labour disputes.

“They brought legislation down on the education workers in our province that led to a Supreme Court challenge because they stomped on people’s constitutional rights and so Kathleen Wynne can complain all she wants about the fact that I value a respectful, positive working relationship with working people—the Liberals have a very, very bad record,” she said.

“I’d say she lives in a glass house and she should stop throwing the stones.”