Alberta NDP forge ahead with plan to implement $15 minimum wage 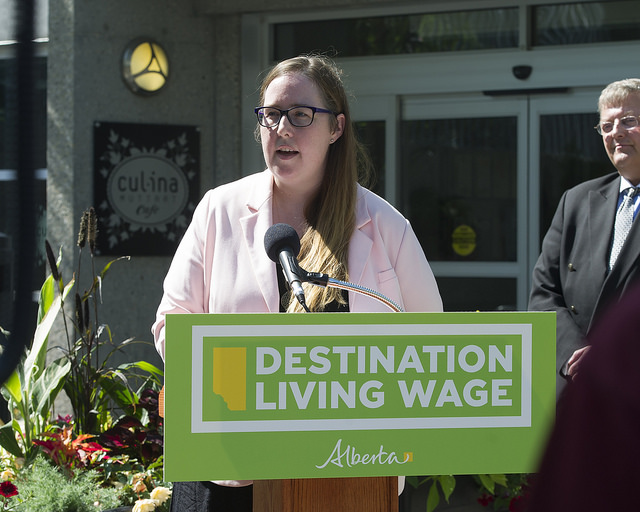 Alberta’s labour minister Christina Gray announced the NDP would continue working toward one of its campaign promises last week. PHOTO: Chris Schwarz/Government of Alberta, via Flickr

EDMONTON—Alberta’s labour minister is dismissing concerns from “well-funded lobby groups” about significant job losses and going ahead with the province’s plan to increase the minimum wage to $15 an hour.

The boost was a major plank in the NDP’s election platform during last year’s provincial election.

“Restaurants Canada and some of the well-funded lobby groups have been heard through this process and they were part of our consultations,” Alberta Labour Minister Christina Gray said late last week.

“I absolutely listened with interest. And through the consultations we listened to small businesses, as well as employees who are low-wage earners, people who are lobbyists for various sides,” she said.

“We believe making sure every Albertan has a fair wage is most important.”

Jan Reimer, executive director of Alberta Council of Women’s Shelters, said the increase is significant, especially for women in need.

“We know that income security is the primary determinant of individual and community health. Alberta’s plan to increase minimum wage to $15 per hour by 2018 could be one of the most significant policy changes for Canadian health this decade,” Reimer said.

Gray said the key is getting more money into the pockets of low-income Albertans.

“We know that these increases will significantly help the nearly 300,000 Albertans who currently earn less than $15 per hour,” said Gray.

“Every Albertan should be able to afford rent, transportation and food. These increases will help insure that low wage earners can at least meet their basic needs.”

Alberta Liberal Leader David Swann did not like the increase. He said many small businesses are already struggling with the economic downturn, so an increase in the minimum wage could be the end of a dream for many entrepreneurs.

“This government is clearly not attuned to the needs of business owners,” Swann said in a news release.

“Either they’re simply not listening or they’re too ideologically driven to acknowledge the timing of their plan needs to be reconsidered; either way, they are not paying attention to the reality of the business climate today.

“I urge the government to take its head out of the sand and recognize the concerns of those that will be negatively affected by their policy,” Swann concluded. “This one-sided, top-down approach to the issue threatens to do more harm than good.”

Amber Ruddy, Alberta director of the Canadian Federation of Independent Business, said it’s proof that the government’s consultation was only for show and that the move is ideologically based.

“They get a slap in the face while the economy is still reeling from a recession.”

A joint news release from the Calgary and Edmonton chambers of commerce said that with increasing rates of business closures and bankruptcies, it’s the wrong time to add to the burdens faced by businesses.

“Our concern is the rapid increase to a $15 minimum wage could have unintended and harmful consequences for the very people it’s trying to help,” said Janet Riopel, president and CEO of the Edmonton chamber.

“What we want is a minimum wage that reflects Alberta’s current economic reality,” said Adam Legge, president and CEO of the Calgary chamber.

“Increases to the minimum wage should be supported by research and tied to economic indicators, and the effect of increases should be monitored and analyzed.”