42 per cent of Canadian workforce at high risk of automation, report says

Already hard-hit by rise of robotics and advanced technology in recent years, Canadian manufacturers are not expected to get a reprieve 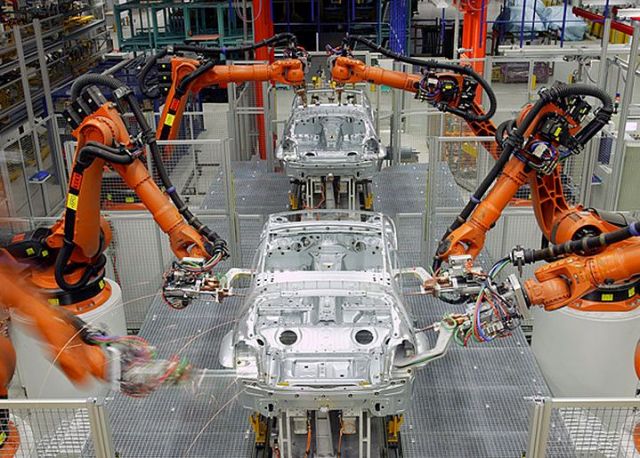 Many manufacturing jobs have already been automated, but the industry, among many others, is expected to continue experiencing job losses due to automation. PHOTO: KUKA Systems GmbH

TORONTO—Nearly half of all Canadian wage earners have reason to be somewhat uneasy about the rise of robots.

According to a new report, 42 per cent of the Canadian labour force is at high risk of being replaced by technology or computerization within the next 10 to 20 years.

Already reeling from the automation of many of its workers, the manufacturing industry is yet again considered at risk as artificial intelligence takes root in plants worldwide. Other jobs considered precarious include office support and general administration roles, sales and services positions, transportation and distribution jobs, and even lower-skilled technical roles in the health, natural and applied sciences, the report from the Brookfield Institute for Innovation + Entrepreneurship ((BII+E) at Ryerson University, said.

“Our findings show that a significant percentage of Canadian jobs are at a high risk of being replaced by automation over the next 10 to 20 years,” Sean Mullin, executive director of BII+E, said. “However, we don’t believe that all of these jobs will be lost. Many will be restructured and new jobs will be created as the nature of occupations change due to the impact of technology and computerization.”

Despite the optimism, the rise of higher skilled robots and technology solutions will continue to put millions of Canadians=s—from transport truck drivers to office assistants—at higher and higher risk of being automated.

Alternatively, the BII+E report found approximately 36 per cent of Canada’s employed labour force is not particularly threatened by automation in the near future. Managers in most industries, as well as nurses, teachers and other educators top the list of low-risk occupations.

On a province-by-province basis, workers in Ontario are expected to suffer the least from the rise of artificial intelligence, while P.E.I.’s workers will be the hardest-hit.