SANTA MONICA, Calif.—With the age of fossil fuels on the ebb, the largest coal company in the world, which extracts hundreds of millions of tonnes of coal from the earth every year, is looking to the future.

“As part of Shenhua’s strategic objective to become a world-class clean energy provider, we are very interested in developing utility-scale concentrating solar power plants, and we look forward to working with SolarReserve in bringing its world-class proprietary technology to China,” Ling Wen, Shenhua’s CEO, said. 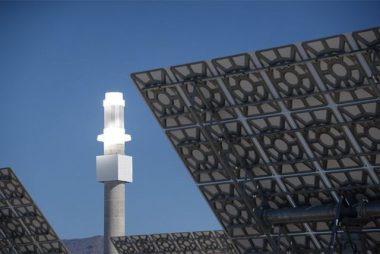 A thermal storage plant uses solar energy to heat molten salt. The scaldingly-hot salt is stored in tanks and can be converted to electricity using turbines. PHOTO: SolarReserve

Under the memorandum of understanding, signed earlier this week in Washington, Shenhua will take the lead on development, while SolarReserve will provide its solar thermal technology, as well as support services. The companies have not released any further details about the projects, but judging by the scale of SolarReserve’s one operating and two under-development solar thermal projects, the gigawatt of capacity will likely translate to at least four separate sites.

SolarReserve brought its inaugural 110 MW solar thermal plant fully-online in the Nevada desert earlier this year; it’s now working on a 100 MW site in South Africa and a larger, 260 MW facility in Chile.

Unlike conventional solar photovoltaic plants, SolarReserve’s solar thermal technology can create power 24 hours a day. To produce energy, its Crescent Dune site in the U.S. uses more than 10,000 heliostat mirrors to reflect solar energy toward an approximately 640-foot molten salt tower at the centre of the complex. Heated to more than 1050 F (566 C) within the tower, the scalding salt is transferred to storage tanks and used to run turbines. Because the salt can maintain its heat for up to ten hours, the plant can continue to produce energy long after the sun goes down. 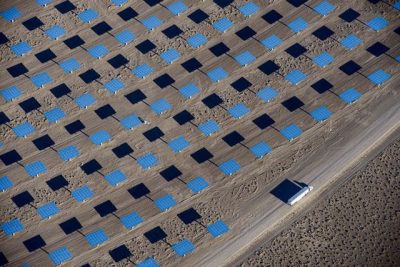 More than 10,000 heliostats direct sunlight toward the thermal solar tower at the centre of SolarReserve’s Crescent Dunes plant. PHOTO: SolarReserve

Utilizing the combination of solar and the molten salt energy storage technology, the plant is also able to maintain a relatively stable electricity output—an attribute sought by grid operators that find the inconsistent production from typical renewable plants difficult to cope with. Like other solar projects, the plants are completely emissions-free.

Part of China’s goal to build 10,000 MW of concentrated solar power—a category that includes solar thermal—the projects are expected to be built in northern and western China. The energy will then be transferred to the country’s main load centres in the eastern part of the country via high-voltage lines.