On the campaign trail, the president conjured images of an imposing structure spanning the U.S.'s 2,000-mile southern border. But with little traction in Congress, the vision is looking more and more like a mirage 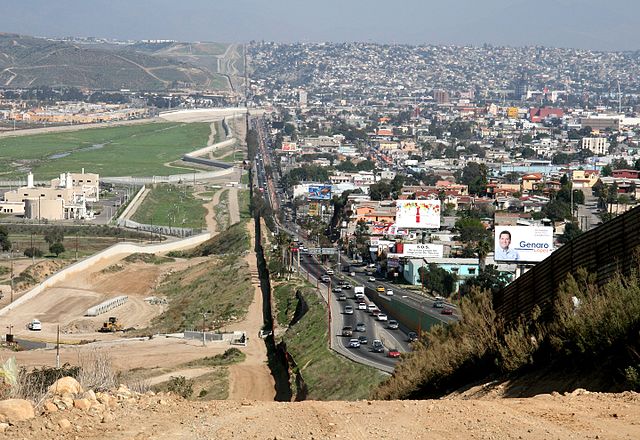 The current border fence separating the U.S.(left) and Mexico (right). Candidate Trump made a number of lofty promised about fortifying the border, few are finding much traction in Congress

WASHINGTON—The White House insists that plans for President Donald Trump’s border wall are on track despite resistance from Congress. What it’s not saying is how it envisions the wall these days.

Trump’s promise to build a “big beautiful wall” and have Mexico pay for it was a campaign rallying cry. It conjured images of an imposing structure spanning the 2,000 miles (3,200 kilometres) of America’s southern border, too tall and strong for foreigners to dare cross illegally.

But since Trump took office, his top aides have made clear that’s not on their drawing boards. It won’t be “from sea to shining sea,” Homeland Security Secretary John Kelly told lawmakers.

So how long will it be? And how much of it will be a thick new wall as opposed to patching up existing fences and other measures? The answers aren’t clear.

A look at what is known about the state of the wall:

WHAT CANDIDATE TRUMP SAID ABOUT THE WALL

From the start of his campaign, Trump said building a wall at the Mexican border and having Mexico pay for it was a priority. His campaign website said his administration would “begin working on an impenetrable physical wall on the southern border on day one.”

Trump never specified exactly what he wanted, but his words suggested a wall stretching from Brownsville, Texas, on the eastern end of the border, to San Diego at the western end.

At times he suggested the wall would be at least 30 feet (9 metres) high, even promising to add an extra 10 feet (3 metres) after former Mexican President Vicente Fox used an expletive to say that Mexico wouldn’t pay for the program.

WHAT THE ADMINISTRATION SAYS ABOUT THE WALL NOW

Days after taking office on Jan. 20, Trump signed an executive order calling for a “physical wall along the southern border.” But the order didn’t include specific details or say how it would be funded or how much it might cost.

In recent months, leaders of the departments that will have the biggest roles in whatever is built have hedged their boss’ campaign comments.

Interior Secretary Ryan Zinke acknowledged in March some of the complications a border-long wall would face. He said physical and geographic challenges would make building a wall “complex in some areas,” including along parts of the Rio Grande and in a remote and mountainous national park in Texas.

Officials from the Homeland Security Department, which is overseeing bids for the wall, have said repeatedly they don’t know yet the length of the wall the administration will ultimately want to build or how much it will cost.

Kelly has said the administration wants to start by building at least 74 miles (119 kilometres) of wall in Texas and near San Diego, though 14 miles (23 kilometres) of that construction would be a replacement for fencing that’s been in place for years.

He has said new construction will be planned for areas where border officials say it’s most needed. He told a Senate budget panel last month that some of the new construction may be a see-through fence, similar to barriers built by the Bush and Obama administrations.

PAYING FOR THE WALL

Mexican officials have flatly rejected paying for the wall. U.S. lawmakers haven’t been enthusiastic about paying for it either.

Trump’s request for $2.6 billion to start the work on an unspecified stretch of border wall was swiftly denied as Congress approved a spending package to keep the government running through the end of the current budget year in September.

Instead lawmakers approved $772 million for border security, including the upkeep and planned replacement of old stretches of border fencing, some built almost two decades ago. Still, the administration promoted this as major progress toward building the wall.

Trump’s first full budget request, which would fund the government for the 2018 budget year, asks for $1.6 billion to pay for roughly 60 miles (95 kilometres) of new wall along two stretches of the border in South Texas and 14 miles (23 kilometres) of wall to replace fencing near San Diego.

It’s unclear whether Congress will approve that request. Democrats and some Republicans have questioned the need for new barriers as arrests of people caught sneaking across the border fall to record lows.

There is a flurry of construction going on at the Mexican border. To the naked eye, it looks like Trump’s wall is underway. But it’s not.

The fencing being built along brief stretches of border in Sunland Park, New Mexico, and Naco, Arizona, is part of a long-planned effort to replace old chain-link fencing that in some cases is decades old.

Later this summer, construction is expected to start on prototypes of new kinds of walls, both see-through and solid, in San Diego. The Homeland Security Department has enough money in its current budget to pay for the prototypes, but nothing more.

The government is expected to pick companies to build the prototypes next month.