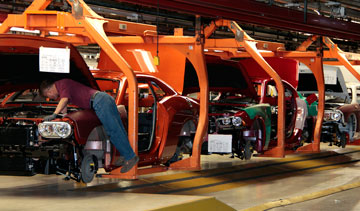 TORONTO—Unifor says Fiat Chrysler has commited to invest a total of $554 million at its Ontario plants in addition to increasing wages and benefits for the union’s members in line with a pattern established at General Motors.

He said the deal, which followed what he called “one very difficult set of negotiations,” mirrors the one reached with General Motors on Sept. 20.

That deal, since ratified by GM workers, includes a two per cent wage increase this year and another two per cent increase in September 2019. There is also a $6,000 signing bonus plus lump-sum bonuses of $2,000 in each of the next three years to most employees.

Dias said the agreement with Fiat Chrysler includes a $325 million investment at an assembly plant in Brampton, Ont., and a pledge to upgrade an old paint shop at the facility.

“We were deeply concerned with the fact that the paint shop in our Brampton assembly plant that builds the 300s, the Chargers and the Challengers is over 30 years old,” said Dias. “If you don’t have a paint shop … it creates incredible uncertainty.”

Dias also announced Fiat Chrysler has committed to make a plug-in hybrid vehicle in Windsor. Unifor spokeswoman Denise Hammond said it will be the Pacifica hybrid that was displayed at the Detroit auto show in January.

The agreement also includes a measure to protect jobs at the automaker’s casting plant in the Toronto suburb of Etobicoke that are threatened by the company’s discontinuation of the Chrysler 200 and the Dodge Dart.

“That decision will lead, candidly, to the layoff of up to about 150, potentially 200 of our members,” Dias said.

“So what we have found is a solution to make sure that our members will not be laid off and will have employment opportunities in the Brampton assembly plant.”

Dias said the automaker has committed to upgrades at the casting plant “to refurbish, to rebuild, to update the machinery, the equipment in order that we are prepared to solidify our strength as a die-cast operation.”

The union leader did not say how much would be spent to achieve this part of the agreement.

Unifor said its members at Fiat Chrysler will vote on the tentative agreement on Sunday, and if approved, the union said it would immediately hold talks with Ford _ the last of the so-called Big Three automakers.

Fiat Chrysler employs 9,750 workers in Brampton, Windsor and Etobicoke. Unifor says a vote on the tentative agreement will be held on Sunday, Oct. 16.