Trudeau defiant on contentious tax changes despite pressure from all sides

The prime minister continues to endorse the proposed tax reforms, even as doctors, farmers, small business owners, the Conservative opposition and even some backbench Liberal MPs push back 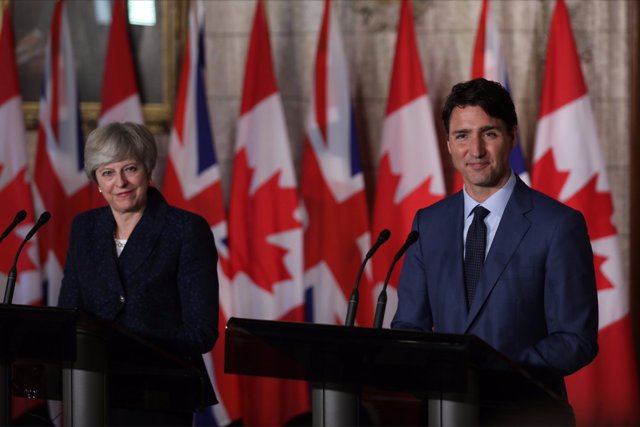 It’s been a busy few days for PM Trudeau. He met with his British counterpart earlier this week and has been engaged in battles over the Liberal’s proposed tax plan as well as government subsidies for Bombardier as Parliament reconvened in Ottawa. PHOTO: Justin Trudeau/Twitter

OTTAWA—Prime Minister Justin Trudeau sounded a defiant note Tuesday as he promised to press ahead with the Liberal government’s controversial tax changes even as clear new evidence emerged to show a Canadian economy on the rebound.

The Finance Department says the federal government ran a smaller deficit than the $23 billion forecast in the spring budget, ending the 2016-17 fiscal year with an actual deficit of $17.8 billion.

Not surprisingly, Trudeau seized on the news as evidence of progress in the Liberal plan to grow the economy by helping middle-class Canadians—a plan that now also includes contentious new tax rules for small businesses.

Trudeau stood firmly by those proposed changes, focusing on the argument that they are about making the system fair, rather than generating revenue.

“We are moving forward to make the tax system fairer to stop the system that encourages wealthy Canadians to use private corporations to pay lower tax rates than the middle class,” Trudeau told a news conference in Ottawa.

The proposed changes have sparked a revolt by doctors, farmers, small business owners and even some backbench Liberal MPs, who have spoken publicly about the complaints they have been hearing from their constituents.

Finance Minister Bill Morneau released the controversial, three-pronged plan in mid-July, including restrictions on the ability of business owners to lower their tax rate by sprinkling income to family members in lower tax brackets, even if those family members do no work for the business.

He also proposed limiting the use of private corporations to make passive investments in things like stocks or real estate and limiting the ability to convert the regular income of a corporation into capital gains, which are typically taxed at a lower rate.

Trudeau said he will take the feedback into account to make sure the proposed changes specifically target the wealthy, but will not throw the entire idea out the window.

“We are glad to hear people’s questions and concerns to ensure that as we move forward—which we will—on changing the system … we will ensure that we’re doing it the right way,” he said.

“We were pleased to see a tremendous amount of response to our consultation paper—people with concerns, some legitimate, some less so—and we are folding them into the proposal that we will put forward, which will make our tax system fairer.”

“I think that this is nothing more than a cash grab that will hurt local businesses’ ability to not only retain the workers that they already have, but to create new jobs in their community,” Sheer said Tuesday.

The House of Commons finance committee will not be studying the proposed changes in detail until legislation is tabled, but has agreed to hear from witnesses on the issue next week. They are inviting Morneau to appear as well.

On Tuesday, Morneau made it clear that while he is listening to concerns, he will not extend the consultation period past Oct. 2.

“We’ve been listening for a long time,” he said.

The Liberal party promised during the election campaign to run deficits of less than $10 billion in each of their first two years in power, partly to fund a massive infrastructure program, before returning to a balanced budget in 2019.

The 2016 Liberal budget—their first after forming government—blew past that promise, tripling the projected deficit and setting no timeline.

“The Liberals are patting themselves on the back for the fact that the deficits they’ve created, while being much larger than the ones they had promised during the campaign, are not as bad as the ones they predicted a short while ago,” said NDP Leader Tom Mulcair.

On Tuesday, Trudeau deflected questions as to whether the better-than-expected numbers in the annual financial report would allow him to finally set a deadline for eliminating the deficit.

Trudeau defended the pace of the program, but the government wants to make sure the projects selected will create jobs and stimulate growth.

“Doing this right is what Canadians expect and that’s what we’re doing, but I can reassure people that the commitments we made to invest in infrastructure will be met,” he said, promising anything they were not able to spend this year will go out next year.

—With files from Stephanie Levitz