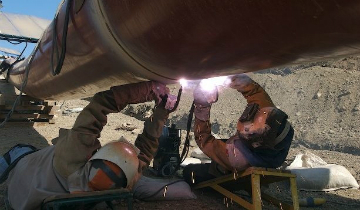 TransCanada Corp. will file applications for project with the NEB next year. PHOTO TransCanada

CALGARY—After seeing the long debate over its Keystone XL pipeline come to an unfavourable conclusion earlier this month, TransCanada Corp. has announced it has signed new contracts to deliver approximately 2.7 billion cubic feet per day of natural gas, through its subsidiary, NOVA Gas Transmission Ltd.

The company said the transportation service contracts will require a $570 million system expansion by 2018.

“Our NGTL System is sitting on top of extensive natural gas supplies, making it well-positioned to unlock the resource and reliably and efficiently link it to growing markets,” Russ Girling, TransCanada’s president and CEO, said. “The system has been operating at capacity, and more capacity is needed in these key areas that support the growth of the prolific gas resource in the Western Sedimentary Basin.”

“Capturing these incremental volumes and constructing the new facilities will ensure NGTL can continue to efficiently and competitively meet the future natural gas transportation needs of our customers,” Girling said. “The expansion of the NGTL System is an important part of TransCanada’s industry leading $48 billion capital growth plan that includes $23 billion of new natural gas pipelines.”

TransCanada said the expansion will include 88 kilometres of new 20 to 48 inch pipeline, one new compressor, about 35 new and expanded meter stations, as well as other associated facilities. The company plans to file applications to build and operate the project’s components with Canada’s National Energy Board in 2016. Pending regulatory approvals, the company will then begin construction in 2017, while the expanded facilities will enter service the following year.

“The 2018 NGTL expansion program represents the minimum system additions required to meet current contracts,” the company said. “Additional expansions may be required following a full assessment of our aggregate system requirements to be completed by the end of 2015.”