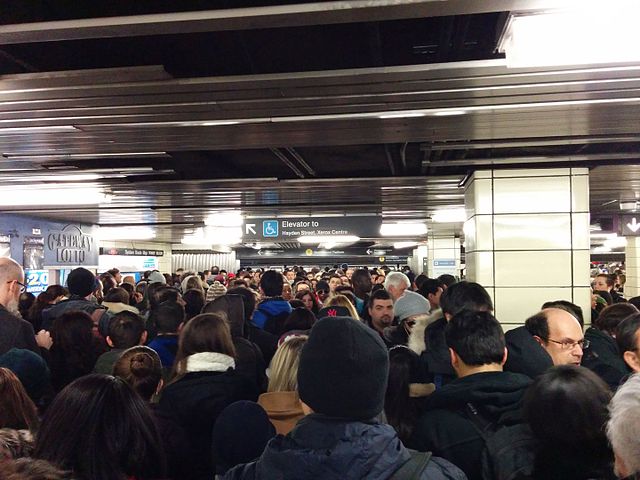 Toronto’s Bloor-Yonge Station is notoriously crowded at rush hour. Problems are compounded when something malfunctions, prompting both safety fears and calls for a relief line

TORONTO—A combination of emergencies on board a train, signal malfunctions and a cracked rail brought much of Toronto’s subway system to a halt last week, raising questions about the city’s readiness to become a major business, sports and entertainment centre in North America.

Even without the frequent service delays, subway overcrowding during rush hours has become a frequent cause of frustration for commuters, who are increasingly relying on ride-hailing services to get to their destinations.

Mayor John Tory is the first to acknowledge that the 60-year-old subway system no longer meets the needs of Canada’s largest city, which is bursting at the seams.

“Toronto is growing fast, and we have to keep up,” Tory said at a recent news conference. “Strong and robust transit is vital to the residents and to their lives. It’s vital to the economy, and to the whole city and province in terms of our liveability and competitiveness.”

Tory, who is facing a municipal election in October, has ambitious goals for the city, including hosting Amazon’s second North American headquarters—a $5-billion project that would create 50,000 new technology jobs. Toronto is also bidding to host several games for the 2026 FIFA World Cup. And the city has partnered with Google parent company Alphabet in a project that aims to build a futuristic “mini-city” on the lakeshore.

“We need to be mindful not only about attracting talent, but also with keeping up with the growth that we’re already projecting to occur in Toronto,” said Cherise Burda, the executive director at Ryerson’s City Building Institute.

Burda said the population of the city’s downtown core—currently 240,000 people—is expected to double over the next 25 years.

“We cannot double the number of cars on the road. So in my opinion, we are not moving fast enough to build transit,” she said.

Murtaza Haider, a transportation engineer also with Ryerson University, says the city desperately needs a relief subway line—another east-west line about a kilometre south of the existing one, which he calls a necessary redundancy.

“We have built the wrong transit in the last 20 years,” said Haider, adding that people have been calling for a relief line for decades. “Where transit is really needed, we find excuses not to build it.”

Meanwhile, commuter frustration came to the fore last Tuesday, when thousands of people faced long delays during morning rush hour following the shutdown of one of the two major north-south subway lines due to technical and emergency issues. Commuters expressed their anger on social media, with many posting photos of overcrowded subway platforms and complaining about lack of information.

Teddy Wilson, who works near one of the city’s busiest subway stations, was caught in the Tuesday delay.

“I was trying to save money on Uber, so I thought I’d take the subway to work,” he said, but that proved to be a mistake.

“When I got on the platform, there was nowhere to go, because it was a sea of people. It was like gridlock, but people.”

Toronto Transit Commission spokesman Brad Ross said the city has done a good job of integrating different transportation modes, such as streetcars, subways and buses, but some of the other infrastructure is out of date and slow.

“Every city is unique, every city has its own challenges, every city does some things really well and suffers at others. Toronto is the same,” he said. “That is something that we are addressing through the replacement of the existing system … The problem is that it takes time.”

Tory agrees there’s been quite a lot of discussion about the relief line.

The municipal, provincial and federal governments have pledged $100 million to the design and planning of the relief line, which the city projects will be built by 2031.

“That’s not soon enough,” said Burda. “Without a downtown relief line, it’s just going to get worse and more congested,” she said.

In the meantime, the relief line is in the planning phase, and there are steps the city can take to help relieve the excess pressure on the existing subway, she said.

“In the downtown core, a huge percentage of people walk or cycle. It’s growing. And I think it’s growing because people are frustrated with the transit system,” Burda said.

The city should build up its network of bike lanes, Burda said. Cyclists, along with pedestrians, reduce the number of people waiting on train platforms.

“Compare that to building a subway. It’s cheaper and it’s faster.”