Suncor plans $2.5B share offering to pay for Syncrude venture

Suncor has, through acquisitions, boosted its share in the Syncrude oilsands project to 53.74 per cent 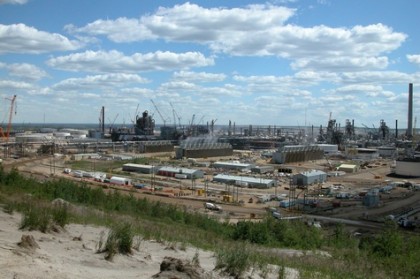 CALGARY—Suncor Energy says it plans to raise $2.5 billion in a bought deal share offering to pay for an increased stake in the Syncrude joint venture.

The Calgary-based company said the money would help reduce its debt and go towards paying for the $937 million acquisition of Murphy Oil’s five per cent stake in the joint venture that Suncor announced in late April.

Buying the stake took Suncor’s share in the Syncrude oilsands operation to a majority 53.74 per cent. In March, Suncor completed the $6.6 billion takeover of Canadian Oil Sands, which boosted its share in Syncrude from 12 to 48.74 per cent.

Suncor said the reduced debt because of the new financing would give it more flexibility in making more acquisitions in the future.

The company says it will sell 71.5 million shares at a price of $35 a share in the deal made through a syndicate of underwriters led by TD Securities Inc., CIBC Capital Markets and J.P. Morgan Securities Canada Inc.

The underwriters have an over-allotment option to buy an additional 10.7 million shares, which if fully exercised would bring gross proceeds of the deal to $2.9 billion. The deal is expected to close on June 22.