According to Subaru Canada, Inc., the sedan model of its rally-bred WRX STI will now be available with all the creature comforts of a luxury sedan while still offering the sports car characteristics that make Subie fans Subie fans.

The all-new Tsurugi (pronounced TSUE-roo-ghee) edition builds on the performance esthetics the 305-horsepower turbocharged all-wheel drive sedan is famous for while adding a power sunroof, automatic climate control and, for the first time ever in the WRX STI lineup, leather seating. 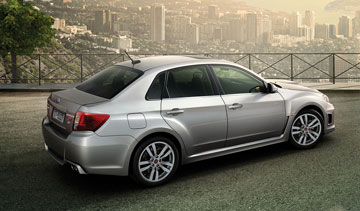 The 2014 Subaru Impreza WRX STI Tsurugi edition does away with the sports sedan's spoiler, giving it a more refined look. PHOTO Subaru Canada

Gone is the boisterous rear spoiler synonymous with the WRX STI, with a smooth deck lid adding a little refinement to the powerful sedan.