The Institute for Energy Economics and Financial Analysis says the purchase could add 36 per cent to the projected $18.1-billion deficit. The federal finance department rejects this assertion 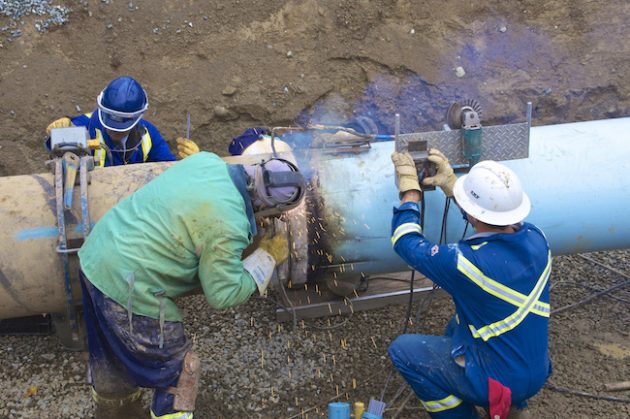 A sustainable energy research group is warning about the financial risks of the feds owning Trans Mountain. PHOTO: Trans Mountain

CALGARY—The federal government’s purchase of the Trans Mountain pipeline will add significantly to the deficit next year, according to a study by a sustainable energy research group.

Buying the Kinder Morgan Canada assets, plus planning and construction costs, will put $6.5 billion in unplanned spending on the books for the 2018-19 fiscal year, the Institute for Energy Economics and Financial Analysis said in its analysis released Tuesday.

Until Ottawa clarifies how it plans to account for the spending, there’s a risk the purchase could add 36 per cent to the projected $18.1-billion deficit, according to the study written by Tom Sanzillo and Kathy Hipple.

“The principal budgetary action here looks to me like an unplanned expenditure for 2019,” said Sanzillo, director of finance for the institute, in an interview.

However, conclusions from the study are “completely incorrect,” according to an emailed response from the federal finance department.

The government would receive an asset of significant value in its deal with Kinder Morgan Canada, and as such it doesn’t expect the purchase would have an immediate impact on the federal debt or deficit, said an unnamed official in the email.

Sanzillo, a former first deputy comptroller of New York State, said the government does have other ways to account for the funds, but that it shouldn’t be borrowing for a speculative asset.

Canada’s ability to sell the pipeline without taking a loss is in doubt because it has already signalled it is a reluctant buyer and because of the poor growth prospects of the oilsands in the latter half of the next decade, the study said.

The authors call on the government to do more to disclose how it arrived at the purchase price, what cost-benefits were weighed, what potential costs the public is exposed to, and whether Kinder Morgan attempted to sell the pipeline elsewhere.

The federal government agreed to buy the existing pipeline, expansion project and terminals from Kinder Morgan Canada for $4.5 billion after the company threatened to walk away from the Trans Mountain expansion project in April.

The government has said it doesn’t plan to be a long-term owner and is looking for buyers, including Indigenous communities, pension funds and the Alberta government.