Stephen Hawking, Yuri Milner and Mark Zuckerberg are shooting for the stars [WATCH] 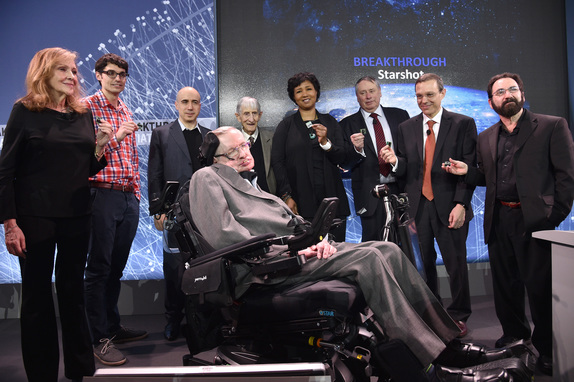 NEW YORK—Internet investor and science philanthropist Yuri Milner was joined at One World Observatory today by renowned cosmologist Stephen Hawking to announce a new plan for space exploration and the search for life in the universe.

The Breakthrough Starshot is a $100 million research and engineering program aiming to demonstrate proof of concept for light-propelled nanocrafts. These could fly at 20 per cent of light speed and capture images of possible planets and other scientific data in our nearest star system, Alpha Centauri, within about 20 years after they are launched.

The program will be led by Pete Worden, the former director of NASA AMES Research Center, and advised by a committee of world-class scientists and engineers. The board will consist of Stephen Hawking, Yuri Milner, and Mark Zuckerberg.

Breakthrough Starshot
The Alpha Centauri star system is 25 trillion miles (4.37 light years) away. With today’s fastest spacecraft, it would take about 30,000 years to get there. Breakthrough Starshot aims to establish whether a gram-scale nanocraft on a sail pushed by a light beam can fly a thousand times faster. It brings the Silicon Valley approach to space travel, capitalizing on exponential advances in certain areas of technology since the beginning of the 21st century.

Here’s a breakdown of how the mission will roll out:

Lightsail: Advances in nanotechnology are producing increasingly thin and light-weight metamaterials, promising to enable the fabrication of meter-scale sails no more than a few hundred atoms thick and at gram-scale mass.

Light Beamer
The rising power and falling cost of lasers has lead to significant advances in light beaming technology. Meanwhile, phased arrays of lasers (the ‘light beamer’) could potentially be scaled up to the 100 gigawatt level. Breakthrough Starshot aims to bring economies of scale to the astronomical scale. The StarChip can be mass-produced at the cost of an iPhone and be sent on missions in large numbers to provide redundancy and coverage. The light beamer is modular and scalable. Once it is assembled and the technology matures, the cost of each launch is expected to fall to a few hundred thousand dollars.

Path to the stars
The research and engineering phase is expected to last a number of years. Following that, development of the ultimate mission to Alpha Centauri would require a budget comparable to the largest current scientific experiments, and would involve:

These and other system requirements represent significant engineering challenges, and they can be reviewed in more detail online at www.breakthroughinitiatives.org. However, the key elements of the proposed system design are based on technology either already available or likely to be attainable in the near future under reasonable assumptions.

The proposed light propulsion system is on a scale significantly exceeding any currently operational analog. The very nature of the project calls for global co-operation and support.

Clearance for launches would be required from all the appropriate government and international organizations.

The Breakthrough Starshot initiative is:

The list of scientific references and publications, as well as the online forum, can be found at www.breakthroughinitiatives.org


Related Stories
Stephen Hawking, best known physicist of his time, dies at 76
Zuckerberg promises a privacy friendly Facebook, sort of
LED lighting may be contributing to worsening light pollution
This device reads a book without opening it [WATCH]