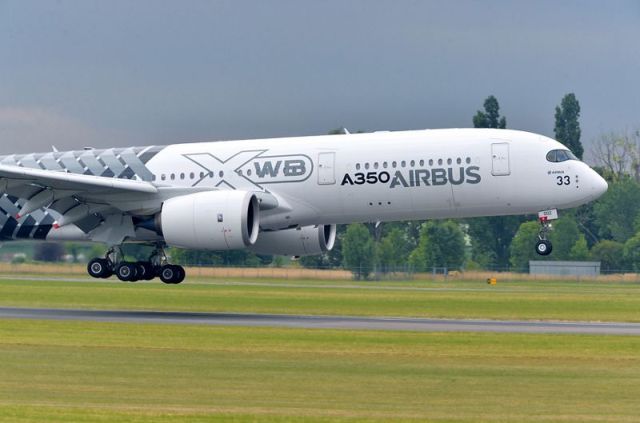 CESA earns approximately half its revenue from Airbus aircraft programs. It is currently developing the hydraulic actuation system for the Airbus A350 XWB PHOTO: P.PIGEYRE/Masterfilms/Airbus

The deal is worth 140 million euro, or approximately $205 million, and will help the company increase its market share with European aviation giant Airbus Group.

“With this transaction, we are significantly increasing our presence in Europe, expanding our product and service offering into complementary activities, adding a significant intellectual property rights portfolio, as well as gaining important content on several key aircraft programs and customers,” he said in a statement.

Headquartered in Madrid, CESA makes landing gear, actuation and hydraulic systems at two Spanish manufacturing plants—one 366,000 sq. ft. site in the capital and another facility in Seville. The company currently employs about 340 workers.

According to CESA, Airbus Defense and Space currently owns a 60 per cent stake in the company, while U.S. defence firm United Technologies Corp. owns the remaining 40 per cent.

Réal Bélanger, executive vice-president of Business Development and Special Projects at Héroux-Devtek, said the deal will build out the company’s core landing gear market while also diversifying into complementary areas.

“In addition to providing us with incremental landing gear business, CESA’s world-class expertise in actuation and hydraulic systems will allow Héroux-Devtek to further enhance its reputation as a key supplier to leading global aerospace original aircraft manufacturers,” he said in a statement.

Along with new business with Airbus, which accounts for about 50 per cent of CESA’s sales, Héroux-Devtek expects the acquisition to result in certain synergies and cross-seeling opportunities in North America.

The Canadian aerospace firm plans to finance the deal with a mix of cash, the assumption of new debt, an increase to its revolving credit facility and a $50 million seven-year loan from Quebec capital development fund Fonds de solidarité FTQ.

The acquisition remains subject to certain conditions, including the approval of the Spanish cabinet.