Plenty of perks for Canadian manufacturers mulling move to N.Y.

From new facilities to retrofits, Canadian manufacturers beginning to put down roots in Buffalo-Niagara

BUFFALO—Canadian manufacturers looking to overcome the hurdle that is the Buy American Act are looking no further than Western New York to expand their operations—and their bottom lines.

From new facilities to retrofits, manufacturers are beginning to make their second—or in some cases only—homes just across the Canada-U.S. border as they look to take advantage of a number of perks that make the Buffalo-Niagara area an attractive place to do business.

Crossing the Peace Bridge into the Empire State, it’s hard to ignore the region’s industrial past—mainly because most of it is still there; buildings frozen in time as companies closed up shop over the years.

Derelict warehouses, abandoned grain elevators and former steel sites pepper the region, remnants of days gone by; reminders of the industry that once was during the booming years leading up to the 1950s.

But as Canadian manufacturers look to shed procurement impediments and the stigma of being from “way up there” in Canada, they are taking advantage of the unused space and talent pool available to them just across the border while remaining close to home.

Speaking during a recent tour of the region, Carlos Vera, CEO of steel fabricating firm Linita Design, said his decision to move to Lackawanna, N.Y., just south of Buffalo, from Guelph, Ont., was made to address a bevy of issues that were handcuffing his business.

Linita, which specializes in water control gates, successfully worked out of southwestern Ontario for more than 35 years, with a 50/50 split of jobs between the U.S. and Canada.

Guelph is only about 150 kilometres from the border crossing into Western New York but it may as well have been a million miles away, according to Vera, as U.S. customer perception of Linita being a Canadian company often made landing American contracts challenging.

Combine that with the Buy American Act, and Vera was staring down the barrel of a massive, untapped market only an hour-and-a-half from home.

So when looking to move into a bigger shop space about five years ago, Vera decided to explore the idea of moving stateside to shed the stigma of the Great White North and take advantage of potential tax benefits not available to him in Guelph.

“I don’t know about the rest of Canada, but compared to Ontario—Guelph or Toronto—(it’s) a big plus to anyone to pay less than half in (property) taxes,” Vera said.

Property prices, too, are much lower in the Buffalo-Niagara region, with plenty of industrial land available for much less than it is in southwestern Ontario.

Vera quickly realized the benefits of setting up shop in Western New York, but said they extend far beyond taxes and land prices.

“You have a market that is 10 times bigger than Canada, so right there that’s the first (plus),” Vera said.

For a firm like Linita, being able to stamp ‘Made in America’ on products means access to more contracts in the U.S. thanks to massive public infrastructure projects in a country of 300-million.

While Linita’s business used to be split evenly between the U.S. and Canada when its manufacturing operations were based in Ontario, Vera said the ratio is now closer to 90/10 in favour of American contracts.

But the benefits also extend to labour, according to Vera.

Much like the infrastructure that was left in place following the region’s mass manufacturing exodus, the skilled labour pool still in the area is plentiful, and the rates are lower than at home.

With fewer public holidays in New York, Vera said he also has more control over time off for employees and the right to choose whether to pay his manufacturing staff of approximately 50 people during holidays, potentially trimming expenses compared to the mandated paid absences in Ontario.

“Now that I think of it, I wonder why I didn’t try this earlier,” Vera said with a laugh.

Vera said there were also government-sponsored incentive programs in place when he shifted operations that softened the blow of moving heavy equipment down the QEW to Western New York.

“If I spent some money in moving this equipment, I have got (it) back in taxes and grants,” Vera said. 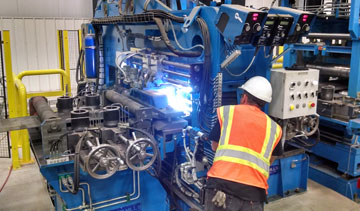 Welded Tube of Canada opened a brand new $50-million, 110,000 sq.ft. facility near Buffalo, N.Y., that has a capacity of 100,000 tons of Hollow Structural Section (HSS) tube used in the oil and gas industry. PHOTO Dan Ilika

Located just down the road from Linita on the old Bethlehem Steel Corp. site in Lackawanna is another Canadian fabricator that made the move to the area for strategic reasons.

Headquartered in Concord, Ont., just north of Toronto, Welded Tube of Canada is the newest member of the growing community of Canadian firms putting down roots in the Buffalo-Niagara region.

Sitting on a 40-acre property, Welded Tube’s brand new $50-million, 110,000 sq.ft. facility opened in September 2013 and produces Hollow Structural Section (HSS) tube for use in the oil and gas industry.

Much like Linita, the decision by Welded Tube management to open a plant south of the border was made in part to stamp ‘Made in America’ on its products for use in the U.S. oil and gas industry, and Lackawanna was a fairly simple choice for a variety of reasons.

With a heat treating facility in Welland, Ont., about 50 kilometres northwest across the Niagara River, proximity was a major factor in the decision, according to vice-president and project manager Robert Pike.

“From a logistics point of view, because we already had a presence in Welland, we needed to be relatively close to that location for this expansion to make sense,” Pike said.

And with plenty of land to choose from, he said the old Bethlehem site made all too much sense.

“We’re bringing steel back to steel town,” Pike said during a tour of the brand new facility.

The massive 1,000-acre site that was once home to American steel industry powerhouse Bethlehem sat idle for 30 years, with little more than skeletons of the past remaining.

But with Welded Tube opening its new facility—and announcing plans to build two more adjacent plants on its 40-acre plot in the next five years—the site is garnering plenty of buzz, with the county mulling the idea of buying the remaining property in a bid to make it easier for more firms to join Welded Tube.

Welded Tube was also promised it wouldn’t have to pay city and county taxes for the first seven years of operations in Lackawanna—a hard offer to turn down with a booming fracking industry in the states directly south of New York.

Whether you work in public infrastructure or energy, or anything in between, there are plenty of resources to take advantage of to help make the transition to setting up shop in the region.

From local offices like non-profit regional development organization Buffalo Niagara Enterprise to state economic development agency Empire State Development, the region has plenty of people in place to help break down the risk-reward of opening a facility in Western New York and make the transition as smooth as possible.

That doesn’t mean the move to New York is an easy one, though, with Welded Tube’s Pike suggesting there was a fair amount of red tape to cut through to get to this point.

“I can tell you that the bureaucracy with New York State and the paperwork that has to be filled out to start an entity (is) very, very cumbersome,” he said. “They’re aware of that and they’re trying to streamline it the best they can, but still, there is a lot of paperwork.”

Whether you’re looking to gain access to a larger market or take advantage of tax breaks, crossing the Canada-U.S. border may be a viable option to help boost your bottom line.

And with a regional revival underway in Western New York, the area may be a good place to start.