The $89.9 million project will add two extra lanes to a busy 10-kilometre stretch of highway between Vaughan and King City, Ont. 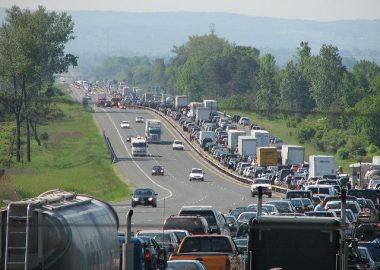 The project will expand the highway from six lanes to eight from Vaughan to King City, Ont. PHOTO: Richard Smith/Flickr

TORONTO—Weekday commuters and traffic bound for Ontario cottage country will soon be able to spillover into an extra lane in both directions on Highway 400 just north of Toronto.

The province is adding two lanes to a 10-kilometre stretch of the north-south highway just outside the city, widening the road to eight lanes from six between Major Mackenzie Drive in Vaughan and King Road in King City, Ont.

“This stretch of highway is already very busy for residents and businesses,” Steven Del Duca, Ontario’s Transportation minister, said in a statement. “Adding new lanes will help keep traffic moving so that businesses can continue to operate and people get where they need to be sooner.”

Del Duca was in King City to announce the investment June 20. The province says about 120,000 vehicles use the 10-km segment of highway every day.

The project is expected to cost $89.9 million and support 629 jobs as construction gets underway.

Though the highway will be two lanes wider, the province is planning to install a High Occupancy Vehicle (HOV) lane in each direction.

The road work is scheduled to wrap up by fall 2020.