by Paola Loriggio and Colin Perkel, The Canadian Press  May 31, 2018

The PCs' campaign promises are now in writing on their website, and while the initiatives have price tags it's unclear how they will be funded 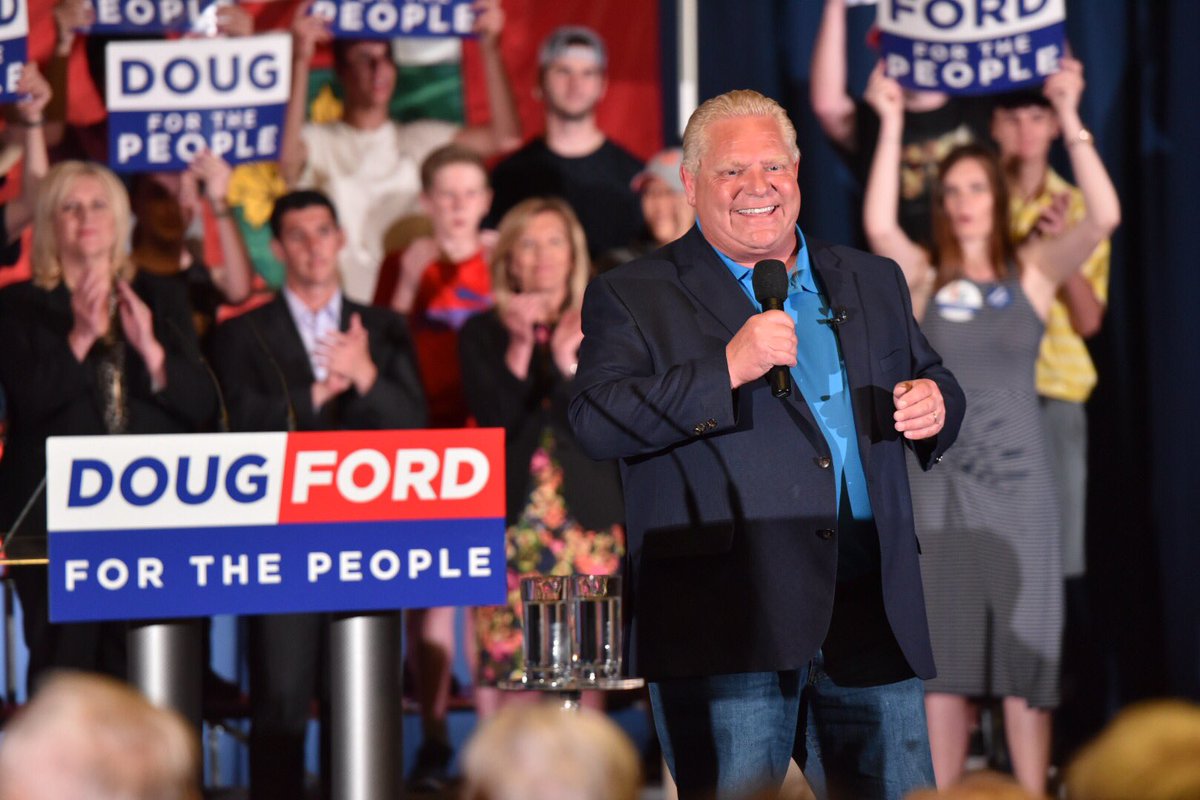 Both Horwath and Wynne said the plan Ford and the PCs posted on their website May 30 doesn’t provide enough information for voters. PHOTO: Doug Ford/Twitter

TORONTO—After vowing for weeks to deliver a fully costed platform, Ontario’s Progressive Conservatives on Wednesday quietly released a compilation of their campaign promises that doesn’t say how they will pay for their pledges.

Posted on the party’s website, the updated “Plan for the People” lays out how much each initiative is expected to cost but not where the money will come from, nor does it explain the billions in so-called “efficiencies” Tory Leader Doug Ford has promised to find.

When asked whether the document was the party’s final plan, Ford’s spokeswoman Melissa Lantsman said in an email: “Correct. This is our plan. Costing of each promise included.”

“We’ve been talking about our plan every day and it’s all there in one spot to show Ontario voters the stark choice between a responsible and modest spending of a PC government and a radical NDP who will be disastrous for the people of Ontario,” she said. “We are going to balance the budget in a responsible way.”

Ford repeatedly promised to bring forward a costed platform before the June 7 vote and faced increasing criticism for not doing so earlier in the campaign, with NDP Leader Andrea Horwath and Liberal Premier Kathleen Wynne deeming it disrespectful to voters.

Both Horwath and Wynne heaped scorn on the notion that Ford had released a full plan Wednesday.

“Look: This is not a fully costed plan, it’s not coherent,” Wynne said at a stop in Markham, Ont., where she pushed her government’s transit record. “All of the things that Doug Ford has said would add up to a $40-billion hole and they have no idea how they would find that.”

Horwath was equally jaundiced, saying it wasn’t good enough for Ford to write a “list of things he might do and put it on the internet.”

People should know what Ford’s plans are, what he’s going to cut and what services might be at risk, the NDP leader said.

“His list of things-to-do that he put on his website is not going to help people to decide which way to vote and what’s their best interest in this campaign,” Horwath said. “What’s worrisome is we have a leader who’s trying to take the chair of the premier in this province and he’s not being honest with people.”

The Tories began the campaign with a significant lead only to find themselves now battling the NDP for first place in the polls, which also show the Liberals falling further behind both.

With the election roughly a week away, Wynne travelled to the heart of her NDP rival’s riding on Wednesday to portray herself as the only seasoned stateswoman in the campaign capable of rising above the ideological fray.

At a stop in Hamilton outside a Stelco steel plant, she attacked both Horwath and Ford as unyielding ideologues without the experience to fend off the threat of American steel tariffs.

“On the one end of the spectrum, you have Doug Ford—he’s expressed his admiration for (U.S. President) Donald Trump, despite the chaos, the uncertainty that the Trump administration has caused Ontario,” Wynne said. “On the other extreme, you have the NDP, who have historically campaigned against free-trade agreements—I would suggest a rigid and impractical position.”

The United States has exempted Canadian steel and aluminum from new tariffs on an interim basis. The exemption is due to expire Friday.

While the federal government under Prime Minister Justin Trudeau has done much of the heavy lifting to protect the industry in Canada, Wynne played up her own efforts.

“We were assertive, we were steadfast in our effort to make Ontario’s case to those decision makers. That threat of U.S. protectionism is not going to scare us off.”

Wynne said Ontario has developed one of the strongest economies in North America under a Liberal government that worked with employees, business leaders, and political leaders on both sides of the Canada-U.S. border.

Voters have a choice between her and her two inexperienced rivals, she said.

“They’re going to be choosing a person to lead them who will be in some very tricky, very delicate negotiations with U.S. officials,” Wynne said. “That’s the reality of the role premier (and) we cannot let ideology get in our way.”

Horwath, who portrayed herself as a champion of steel and steelworkers, rejected Wynne’s comments as “trying to stir up some trouble.” She said she had been vocal in her support of the industry.

“Should I be given the opportunity to serve as premier I will be one of the biggest champions the steel industry has ever seen,” Horwath said. “It has literally, not only built our country and fuelled the economy of a nation, but it has absolutely and completely … built my city.”