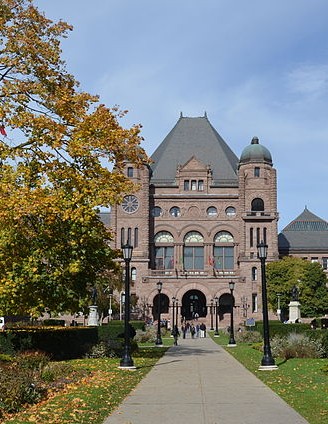 Ontario spent a total of $1.6 million on all initial ORPP advertising. PHOTO: Raysonho, via Wikimedia Commons

The Canadian Taxpayers’ Federation asked for the figure through a Freedom of Information request and was told that $592,834 was spent between Aug. 2 and Oct. 14, five days before the federal election.

The response also shows that the government spent more than $1.6 million in total on all ORPP advertising.

Christine Van Geyn, the director of the federation in Ontario, says Wynne campaigned with the federal Liberals on the issue of pensions during the federal election, and “used $600,000 of taxpayer money to support this campaign.”

Wynne says the timing of the ads was not intentional, as she had no idea the federal election would be called so early.

She says it’s important to let people know the ORPP, set to begin taking effect on Jan. 1, 2017, is coming.

“I think it takes a while for people to learn about a thing and to know that it’s coming, so that initial advertising was about foreshadowing for people that this is coming so they will hear more about it in the future,” she said Monday.

Ontario’s auditor general said during the federal election that she would have questioned the timing of a pension plan ad if the Liberal government hadn’t changed the oversight rules.

The provincial government amended the criteria under which the auditor general approves or rejects government ads, with auditor Bonnie Lysyk warning the changes would gut the legislation and could lead to the public paying for partisan advertising.

She said at the time it would reduce her office to a rubber stamp, and could put them in the position of approving ads that conformed to the government’s new definition of partisan, but were “clearly partisan by any objective, reasonable standard.”

The ORPP ad in question met all of the new criteria for not being partisan, but certain aspects of the ad and the timing during the federal election would have given Lysyk pause under the old, more subjective criteria, she said.