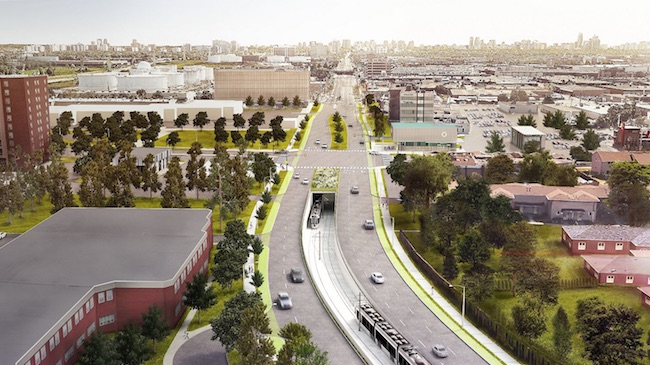 A rendering of the new light rail line, which includes on underground stop, linking it to the Toronto subway. PHOTO: Infrastructure Ontario/Twitter

Three consortia had been competing for the contract since Infrastructure Ontario launched the request for proposals stage of the procurement process in February of last year. Humber Valley Transit Partners, consisting of SNC-Lavalin Inc. and Graham Group Ltd.; and FACT Partners, made of up EllisDon and Bechtel Corp.; were the other two teams competing for the approximately $1.2 billion project.

The transit line will link Toronto’s Finch West Subway Station with Humber College. Plans include 16 surface stops, a below-grade terminus at the college and one underground station. The construction team will also be responsible for building a maintenance and storage facility for the line’s light rail cars.

The province and Mosaic Transit are expected to firm up the contract in the coming months, with the financial close and the start of construction expected sometime in the second quarter of this year.

Aecon, ACS and CRH hold equal 33 per cent stakes in the project during the construction phase, while Aecon and ACS each own a 50 per cent interest in the rail project’s 30-year maintenance agreement.

The province is expected to release further details about the construction timeline and project costs at financial close. Initial plans schedule construction to wrap up by 2021.