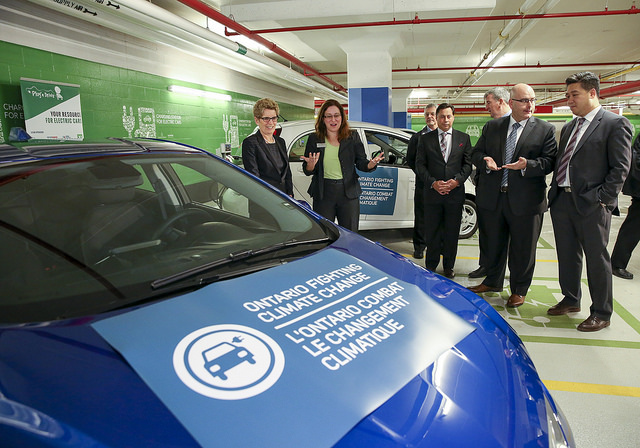 One of the Ontario awards too aim at the province’s electric vehicle incentive program. PHOTO: Premier of Ontario PhotographyFlickr

OTTAWA—Ontario’s government, the City of Victoria and Canada Revenue Agency have won awards for wasteful government spending, as judged by the Canadian Taxpayers Federation.

The federation has announced the annual Teddy Government Waste Award winners, handing two of the pig-shaped trophies to the Government of Ontario.

One is for the province’s electric vehicle incentive program, which the federation says provides subsidies for luxury cars, while the other is a lifetime achievement award for what the spending watchdog says is the lengthy mishandling of Ontario’s energy policy.

The City of Victoria wins the municipal waste award for the Johnson Street Bridge replacement project that the federation says has ballooned from $63 million to $105 million over five years, and is three-years behind schedule.

Canada Revenue Agency’s decision to pay an employee $538,000 in moving expenses for a 192 kilometre relocation from Richmond Hill to Belleville, Ont., nets that agency the federal Teddy award for government waste.

This is the 19th annual Teddy Award selection from the Canadian Taxpayers Federation, with trophies named for Ted Weatherill, a former federal appointee who was fired in 1999 over his bloated expense claims.

Related Stories
Ontario jumps back into the red as Liberals go on spending spree ahead of election
Ontario Liberals bouncing back on touchy hydro file, internal polling shows
MPP Chan says exporting is a priority for Ontario Liberals
Liberals pushing back $828M in planned federal infrastructure spending
Manufacturing In Focus