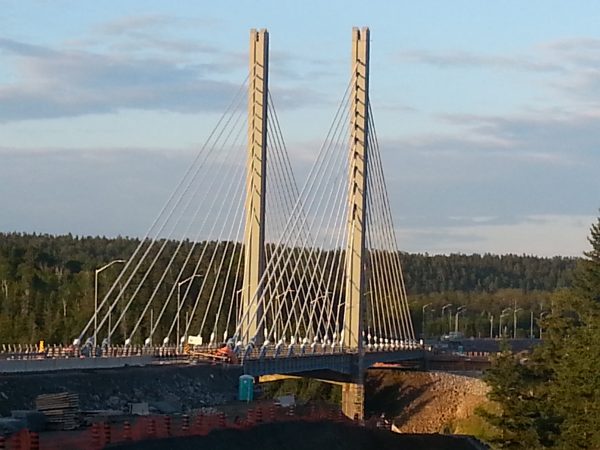 TORONTO—Repairs to a bridge in northwestern Ontario will take nearly three years and delays have pushed the total cost well over the initial $8 million to $12 million estimate, according to documents obtained by The Canadian Press.

But the Ontario government is refusing to say just how much over, and whether taxpayers will have to foot the bill for fixes to the Nipigon Bridge.

“Since the malfunction in January 2016 our top priority has been to ensure the public is aware of the status of the project and the cause of the malfunction,” Celso Pereira, the transportation minister’s spokesman, said in a statement.

“With that said, negotiations with the contractor regarding these costs are currently underway. As such, the ministry is not able to release them as it could jeopardize the status of these negotiations.”

Engineering reports found that a combination of design and installation deficiencies of several key components caused the bridge to fail, severing a critical Trans-Canada Highway link. Improperly tightened bolts on one portion of the bridge snapped, causing the steel decking to lift about 60 centimetres.

That was just 42 days after the $106-million bridge had opened.

The bridge reopened to one lane of traffic the next day and two lanes in late February, but according to the ministry, it won’t be open to four lanes of traffic until late 2018.

When those engineering reports were released in September 2016, the government estimated the repair work at between $8 million and $12 million.

Documents obtained by The Canadian Press through a Freedom of Information request, with project updates from May, June and October, discuss construction challenges and delays that are leading to additional costs, but nearly all of those amounts are redacted.

One of the only additional cost estimates not removed from the documents is that a repair to a floor beam connecting two girders that wasn’t fitting properly “will add one month to the construction schedule and could cost up to $2 million.”

NDP transportation critic Wayne Gates said the public has a right to know the additional costs and the company awarded the project should be paying.

“They should be responsible for any of the cost at all,” he said. “Whether it’s $8 to $12 million or whether it’s $30 million, taxpayers shouldn’t pay a penny for this.”

Progressive Conservative critic Michael Harris said he would have expected negotiations about repair costs to have been done before repairs began, and not 16 months later.

“I think anybody, you or I, are building a house or doing a renovation, we try to get those costs agreed to up front,” he said. “It seems this government negotiates completely backwards.”

One of the issues listed is with the east bearing, which the documents say the contractor repaired, but the ministry has concerns with its long-term durability.

“Contractually, the bearing design and installation are the responsibility of the contractor, however considering previous issues (experienced) with the west bearing, the ministry will need to examine more closely,” the documents say. “If the repair is not able to be completed by the contractor, the ministry will be required to stop the work until a satisfactory repair is in place.”

If that happens, “the contractor may perceive this as a change to the contract and request payment,” the documents say.