Ont. Liberals to present last budget before election after days of spending promises

Kathleen Wynne and her Liberal government are promising billions in health care and child care spending, but rival PC leader Doug Ford says it's money they don't have to spend 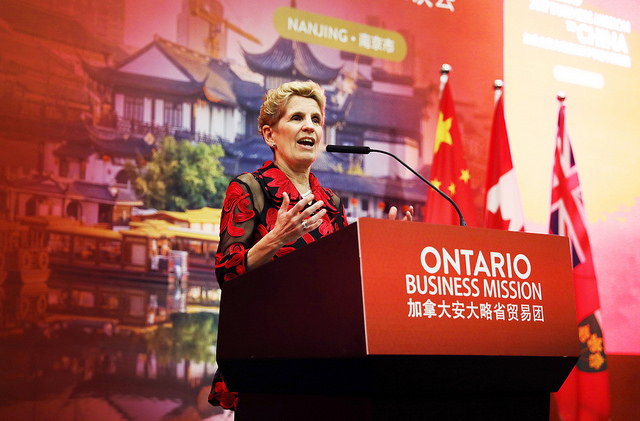 Ont. Premier Kathleen Wynne is pushing through massive initiatives to improve health care and child care ahead of the June 7 election. Her Liberals are currently lagging in the polls. PHOTO: Premier of Ontario Photography/Flickr

TORONTO—Ontario’s Liberal government is poised to present its final budget before the June election on Wednesday, capping off days of policy announcements that have seen the party pledge billions for health care and promise free child care for preschoolers.

The government has said the 2018 budget will run a deficit of one per cent of the gross domestic product—potentially as high as $8 billion—reneging on a key promise to balance the books for another year.

But the Liberals, who continue to lag in the polls, have said the added spending is necessary to help struggling Ontario residents, adding the fiscal blueprint would include a clear path to balance.

Their recent spending promises have been panned by the opposition as political moves meant to curry favour with voters.

At least one economic analyst said the Liberals’ big-spending plans sets the province on an unsustainable path, particularly since it’s unlikely they will raise taxes to increase revenue during an election year.

Alexandre Laurin, director of research for the independent think tank C.D. Howe Institute, pointed to a report from Ontario’s fiscal watchdog late last year that predicted the province would run a $4 billion deficit in 2017-2018, despite the Liberals’ claims to have balanced the budget.

The Financial Accountability Office projected the government’s budget deficit would grow to $9.8 billion in 2021-2022.

“We’re starting from a point where the fiscal balance is already pretty unsustainable,” he said. “This points to a government that should be prudent in its budgeting because…(there’s) no strength in the fiscal projections.”

Laurin said if the Liberals want to invest in their priorities, they would do better to cut back elsewhere to avoid ballooning expenditures.

“We may really need these but the thing is there must be something else that we need less, and we could cut there to ensure that in the future, to ensure that 20 years from now we don’t spend 20 cents out of every dollar of taxes to pay for debt charges,” he said.

The Liberals laid out their priorities in a throne speech last week, which they have followed up with a steady stream of new funding announcements.

The latest promise, delivered on the eve of the budget, was a $2.2 billion program, beginning in 2020, that would fund the cost of full-day, licensed child care once children turn two-and-a-half. The funding would cover their care costs until they become eligible for full-day kindergarten.

The premier has also promised to spend more than $300 million over three years to improve supports for children with special needs and hire more teachers.

On the health-care front, the Liberals have said the province’s mental health system will receive an additional $2.1 billion over the next four years, a plan Wynne says would bolster youth access to therapy and counselling.

The Liberals have also announced free prescription drugs for seniors, a program that would kick in Aug. 1, 2019 and eliminate deductibles and co-payments for seniors buying more than 4,400 prescription medications.

The program will cost $575 million a year when it is fully operational in 2020-21 and will save the average senior an estimated $240 a year, the government has said.

The government has also promised to boost hospital spending by $822 million in 2018-2019, a 4.6 per cent increase the Liberals said aims to cut wait times and address capacity issues. That money is on top of a 3.2 per cent increase to hospitals included in last year’s provincial budget.

Canada’s largest pediatric hospital will also get a hand in rebuilding its aging facility in downtown Toronto, with the Liberals earmarking $2.4 billion for SickKids hospital’s 10-year plan. Work is expected to begin later this year and conclude in 2028.

Ontario’s spring election will be held on June 7.